Arsenal will be looking to reach the FA Cup final when they take on Reading on Saturday evening. Here is the side we think Arsene Wenger will pick.

Arsenal will be looking to reach the final of the FA Cup when they take on Reading at Wembley on Saturday evening. Here is the side Gooner Mac thinks Arsene Wenger will select:

Goalkeeper: The boss has already confirmed that Wojciech Szczesny will start in goal this weekend so David Ospina will drop to the bench.

Defence: Speculation in the newspapers this week suggests that Wenger will also hand a recall to Mathieu Dbeuchy after the Frenchman recovered from a dislocated shoulder. That would see Hector Bellerin make way but Laurent Koscielny and Per Mertesacker should keep their places in defence.

Kieran Gibbs is pushing for a recall but Nacho Monreal appears to be the favoured choice right now so I expect him to once again start at left-back.

Midfield: The manager has confirmed that Mikel Arteta and Alex Oxlade-Chamberlain will miss the game but Jack Wilshere is back in contention – although I don’t think he’ll start so a place on the bench is the best he can hope for.

Francis Coquelin will continue in the holding role and I think we could see Arsene stick with the same front six that’s played in the last two games. That would see Santi Cazorla play in a deeper role with Aaron Ramsey out wide.

Attack:  With Ramsey on the right, it means that the likes of Danny Welbeck and Theo Walcott will miss out. I’d personally prefer to see one of Welbeck of Walcott out wide as it gives us more natural width but Wenger has gone with Rambo in recent games so I expect he’ll stick with that winning formula this weekend.

Mesut Ozil and Alexis Sanchez are almost certain to start and will continue to support Olivier Giroud in attack. 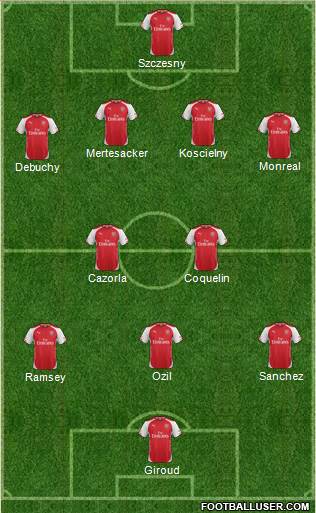