Liverpool, Arsenal, Manchester United, Chelsea and Tottenham players are all in the running for the PFA Players’ Player of the Year Award. See the nominees

Liverpool, Arsenal, Manchester United, Chelsea and Tottenham players are all in the running for the PFA Players’ Player of the Year Award, it has been confirmed this afternoon…

Chelsea pair Diego Costa and Eden Hazard are joined by Alexis Sanchez, Harry Kane, David De Gea and Philippe Coutinho on the shortlist of nominees for this season’s PFA Players’ Player of the Year Award.

The Blues have lead the way in the Premier League from the first day of the season with Hazard and Costa their two most potent weapons in attack so it’s no surprise to see the duo nominated on the six-man shortlist.

Costa made a flying start to his career at Stamford Bridge following his move from Atletico Madrid but injuries have seen his form dip in recent weeks, but Hazard has been a constant threat for the league leaders.

Sanchez has been a revelation at Arsenal following his move from Barcelona last summer with the Chilean netting 14 goals and providing 8 assists during his debut season in England, so he should be a strong contender for the award.

Another stand-out performer in recent months has been Tottenham’s Harry Kane with the 21-year-old scoring an incredible 29 goals in all competitions for the North London club while he’s also broken into the senior England team set-up.

Liverpool playmaker Coutinho – who’s enjoyed some excellent spells of form in recent months – is also on the list while Man Utd stopper David De Gea completes the six-man shortlist and the Spaniard has been consistently outstanding between the sticks for Louis van Gaal’s men.

Hazard is currently the odds on favourite to lift the award with some bookmakers making him 1/7, but if you fancy having a flutter check out the latest odds. I’d personally like to see David De Gea win it as I think he’s been the most consistent, but keepers rarely win these awards and with Chelsea likely to lift the title, I suppose it makes sense one of their players should win.

The official winner will be announced at a PFA Awards ceremony in London on April 26th. 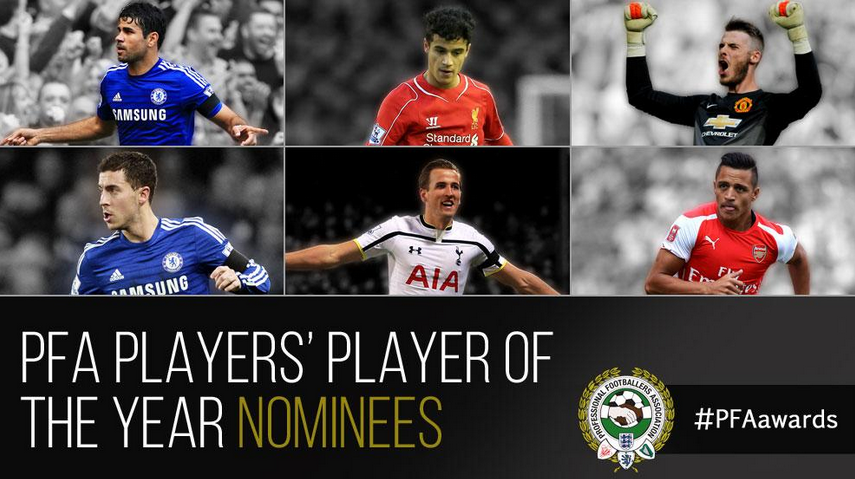