Man Utd will be looking to continue their recent good form when they take on Chelsea at the Bridge on Saturday. Here’s our predicted starting line-up.

Manchester United will be looking to continue their recent good form when they take on Chelsea at Stamford Bridge on Saturday evening. Here’s the starting eleven I think Louis van Gaal will go with:

Defence: Chris Smalling made a successful return to the starting line-up against Manchester City last week so he’s expected to keep his place alongside Phil Jones at the back, meaning Marcos Rojo may have to make do with a place on the bench.

Luke Shaw could be back in contention after a hamstring injury but van Gaal is likely to stick with Daley Blind at left-back while Antonio Valencia should keep his place on the right ahead of Rafael.

Midfield: Michael Carrick will continue in the holding role while Ander Herrera should keep his place alongside him in midfield after impressing in recent weeks. Juan Mata should also keep his place on the wing while Ashley Young continued his excellent form with a goal and two assists against Man City last weekend. This means that Angel Di Maria is likely to once again be among the substitutes.

Attack: Robin van Persie is back in full training and should be available for selection but I think we’ll see van Gaal stick with the same side that four four past City last Sunday so the Dutchman may only make the bench. This will see Marouane Fellaini in support of Wayne Rooney in attack with out-of-favour striker Radamel Falcao expected to continue on the bench. 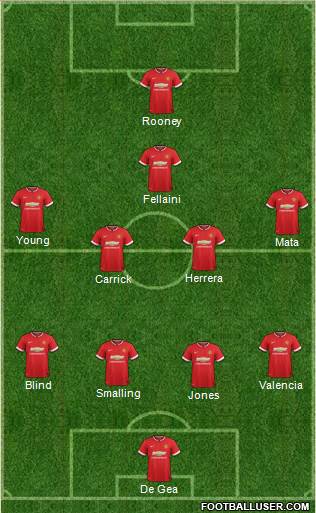