Arsenal take on Reading in the semi final of the FA Cup tonight. Here’s a preview with team news, line-up, predicted score and betting tips for the game.

FA Cup holders Arsenal will look to book their place in the final for the second consecutive year when they face Reading at Wembley this evening.

We made it through to the last four after a 2-1 victory over Manchester United in the quarter finals last month and have continued our sensational form ever since, with last weeks 1-0 win at Burnley our eighth league win in a row.

That form has seen us climb up to second in the Premier League table and all-but ensured we’ll be playing in the Champions League again next season, but our focus today will be continuing the defence of the FA Cup.

Last season we were given a real scare by Wigan at this stage of the competition with the Championship side taking a two-goal lead before we fought back to win it on penalties, so the players will hopefully have learned their lesson about underestimating the opposition.

Reading aren’t in good form, with Steve Clarke’s men taking just three points from their last six games, but that will count for nothing at Wembley tonight and they will no doubt be desperate to pull off a shock.

Arsene Wenger has confirmed that Alex Oxlade-Chamberlain is still out for at least another two weeks due to an on-going groin injury so he’s certain to miss out.

Mikel Arteta is also still out after suffering a minor set-back in his recovery from long-term calf and ankle injuries.

However, Jack Wilshere is back in the squad after overcoming his ankle trouble while Mathieu Debuchy is also available again after recovering from a shoulder injury.

The boss has confirmed that Wojciech Szczesny will start in goal, while the likes of Danny Welbeck, Theo Walcott and Kieran Gibbs are all pushing for recalls.

As for Reading, they have been boosted by the news that Pavel Pogrebnyak will be available after the striker overcome a calf complaint.

Nathan Ake and Kwesi Appiah are cup-tied but fellow loanees Nathaniel Chalobah and Jamie Mackie are available for selection. 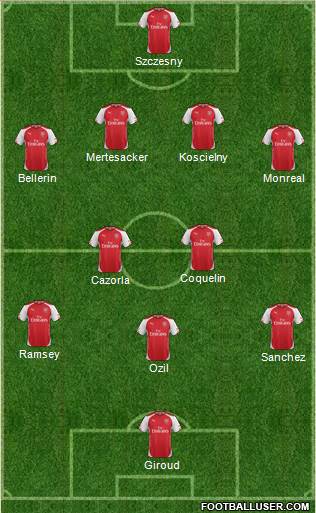 Arsenal 2-0 Reading: You can not argue with our form over the past few months and the squad genuinely looks to be full of confidence so I’d be hugely surprised if we didn’t book our place in the final. It’s rarely straight-forward in the cup games but I’m going for  2-0 win, with us to score a late second to secure the victory.

Arsenal are obviously the heavy favourites to win the game but Football-Talk can get you enhanced odds of 3/1 for an Arsenal win plus you can get money back if you lose and £100 worth of free bets. My prediction of 2-0 is on offer at odds of 11/2 while I also like the look of Olivier Giroud to open the scoring at 16/5. If we combine those bets in a scorecast then we get very tempting odds of 12/1. Surely that’s got to be worth a couple of quid!?