Chelsea boss Jose Mourinho is plotting an audacious move to try and lure Arsenal playmaker Mesut Ozil to Stamford Bridge this summer, according to reports.

As the opening of the summer transfer window approaches, managers are working hard identifying targets and lining-up potential deals so we’ll bring you all the news and gossip. Today, Chelsea are linked with a shock move for Mesut Ozil…. 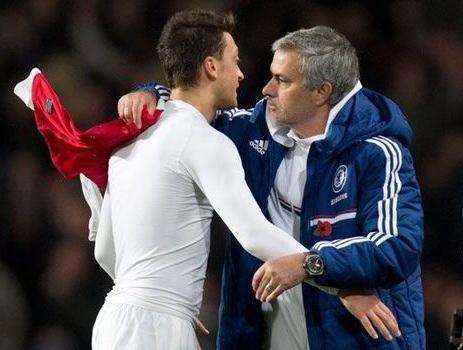 Chelsea boss Jose Mourinho is plotting an audacious move to try and lure Arsenal playmaker Mesut Ozil to Stamford Bridge this summer, according to reports.

Mourinho signed Ozil from Werder Bremen while he was in charge at Real Madrid in 2010 and the pair enjoyed a hugely successful time together at the Bernabeu, winning a La Liga title, a Copa del Rey and the Supercopa de Espana.

The Portuguese coach has since moved back to Chelsea while Ozil joined Arsenal from Madrid in 2013 in a club record deal worth £42.5m, but it seems Mourinho is keen to be reunited at Stamford Bridge.

The Daily Star are citing reports coming out of Spain that claim the Blues boss has expressed an interest in signing Ozil and is now lining-up an audacious swoop this summer.

However, any attempt is surely going to be met with fierce resistance from Arsenal as Ozil is a key part of Arsene Wenger’s starting eleven and the Gunners are no longer under any financial pressure to sell their best players.

Ozil has often been criticised by pundits and even some sections of the Arsenal support for an apparent lack of effort since moving to the Emirates almost two years ago but the German international insists his statistics prove he works harder than most players.

“If you look at my statistics, I am one of the players who covers the most distance. Also, if you look at the stats in terms of assists and creating chances, they are all pretty good.

“I know some people might want me to make X-number of passes – but people often miss what goes on off the ball.

“I’m not really bothered what critics say. What’s important is what the manager and coaching staff think.

“I am a team player, I just care about always giving 100 per cent for the team.” Ozil is quoted as saying by the Daily Star

The playmaker has been back to his best form in recent weeks after missing a large part of the season through injury and he assisted both goals as an Alexis Sanchez double booked Arsenal’s place in the FA Cup final on Saturday evening.

Ozil is often a misunderstood footballer but his importance to Arsenal is clear for all to see and it’s no coincidence his return to fitness has led to the North Londoners superb 2015 form, so I don’t think there’s any chance Wenger would even consider selling him to Chelsea.

Mourinho is clearly a huge fan, as he recently named Ozil in his all-time XI, but with Wenger looking to build a team capable of challenging the soon-to-be Premier League champions next season, I’m sure the last thing on his mind is selling one of his best players to his rivals.