Arsenal are sweating over the fitness of Per Mertesacker with the German international struggling to be passed fit to face Chelsea this weekend. 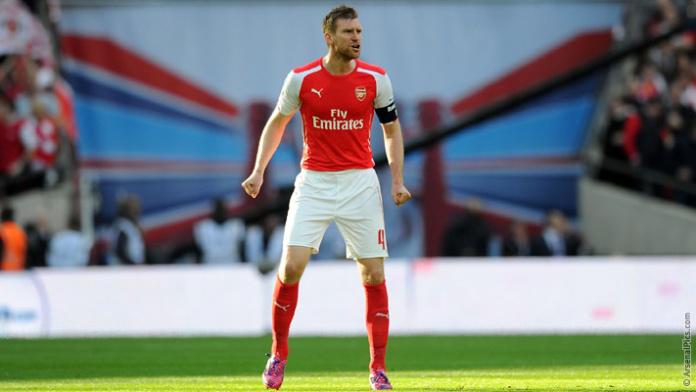 Arsenal are sweating over the fitness of Per Mertesacker with the German international struggling to be passed fit to face Chelsea this weekend, according to the Mirror.

Mertesacker limped out of Saturday’s FA Cup semi-final win over Reading after suffering an ankle injury in the 63rd minute following a late tackle.

The 30-year-old left Wembley wearing a protective boot and boss Arsene Wenger said after the match that the injury didn’t ‘look good’.

He has an ankle problem. He is limping badly so that doesn’t look too good.

The Mirror are now reporting that the German defender is struggling to overcome the injury with the player fearing he’s set to miss the top-of-the-table clash at the Emirates this weekend.

I’m sure Wenger and his medical team will be working hard to get the centre-back fit as soon as possible but it appears he could be facing a race against time to face the Premier League leaders.

Should Mertesacker be ruled out, it would be a huge blow to Arsenal as they’d be losing their most experienced defender and also their stand-in captain for a crunch clash against their London rivals.

Gabriel Paulista is on stand-by to step in and start alongside Laurent Koscielny at the back and although the Brazilian has impressed following his arrival from Villarreal in January, it would be a huge test if he starts against Chelsea, particularly if Diego Costa returns from a hamstring injury.