Liverpool and Manchester United face a battle to land Miralem Pjanic as Barcelona are lining-up a huge €56m bid for the Roma midfielder, according to reports.

As the opening of the summer transfer window approaches, managers are working hard identifying targets and lining-up potential deals so we’ll bring you all the news and gossip. Today, Liverpool and Man Utd face a battle to land Miralem Pjanic… 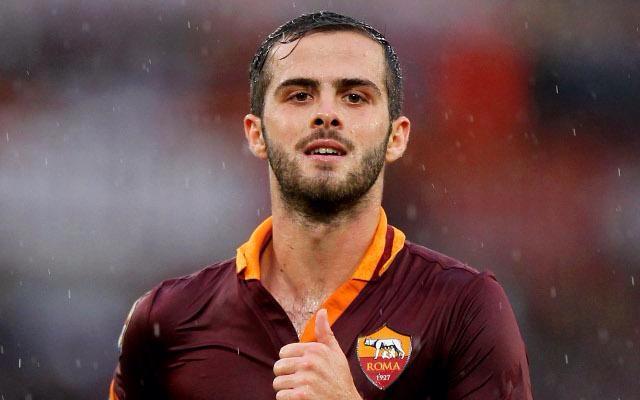 Liverpool and Manchester United face a battle to land Miralem Pjanic as Barcelona are lining-up a huge €56m bid for the Roma midfielder, according to reports.

Pjanic has been constantly linked with a move away from the Stadio Olimpico in recent seasons but he’s so far remained loyal to Rudi Garcia’s men and penned a new long-term contract extension last May.

However, reports last month suggested that the Bosnian international was ready to end his four-year stay at Roma amid speculation of a potential move to the Premier League this summer.

Liverpool have long been linked with a move for Pjanic and speculation suggests that Brendan Rodgers is ready to renew his interest once again as he looks to bring in a replacement for the departing Steven Gerrard.

Manchester United have also been hot on the trail of the 25-year-old and reports claim that Louis van Gaal has already contacted Roma to register his interest in signing the all-action midfielder this summer.

However, it seems the English giants are now going to face even more competition as the Daily Star are citing reports coming out of Spain that suggest Barcelona are ready to table a formal €56m (£40m) offer after going cold on a deal for Paul Pogba.

With Xavi set to end his stay at the Nou Camp at the end of the season, the Catalans are on the look-out for a new midfielder and the newspaper claims they have now identified Pjanic as a key target.

Obviously Barca are a fearsome club to try and take on when it comes to transfers but the good news for Liverpool and United is that due to their transfer embargo, the Spaniard’s won’t be able to complete any proposed deal until January 2016.

If Roma are to cash-in, they would surely prefer to do it in the summer when they’ll have more time to bring in a replacement, while Pjanic may also be reluctant to remain at in Italy for another six months if he’s already agreed a move to Barca in the winter.

Therefore, the likes of Liverpool and United should still be fairly confident they’ll be able to win the race for his signature – although it remains to be seen whether they’ll be prepared to match what Barcelona are reportedly willing to offer.