Arsene Wenger has given a team news and injury update ahead of Arsenal’s crucial top-of-the-table clash with Chelsea on Sunday. See what he had to say here. 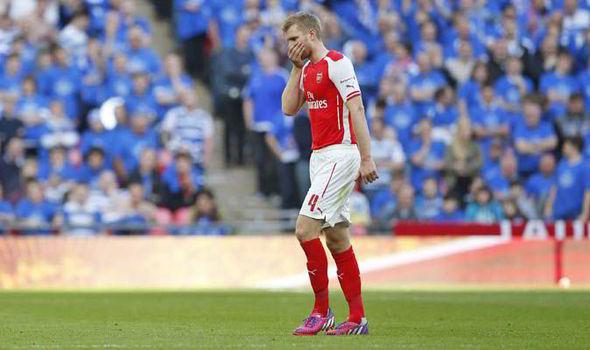 Arsenal will look to keep their slim title hopes alive when they entertain run-away Premier League leaders Chelsea at the Emirates on Sunday afternoon.

Ahead of the game, Arsene Wenger has been speaking to the media at his pre-match press conference this morning and gave Arsenal.com a team news and injury update.

The Gunners boss confirmed that Per Mertesacker is a major doubt after picking up an ankle injury during last weeks FA Cup semi final victory over Reading.

The German international has been unable to train all week and although he’s receiving treatment from the clubs medical staff, Wenger rates him at just 50/50 to be available to face Chelsea on Sunday.

Should the 30-year-old miss out, then the Arsenal manager has confirmed that January signing Gabriel Paulista will step in to start alongside Laurent Koscielny at the back.

Unfortunately for the North Londoners, Alex Oxlade-Chamberlain remains unavailable as he continues to stay on the sidelines with a niggling groin injury.

The midfielder was originally ruled out with a hamstring injury that he suffered against Man Utd in February but it aggravated a groin problem and it doesn’t sound like he’ll be back any time soon.

However, one man who is seemingly getting closer to making a long-awaited return to action is Mikel Arteta with Wenger confirming that the Spaniard is now back in full training but he still lacks match sharpness so isn’t in contention this weekend.

on the latest team news…

Last week against Reading, Per Mertesacker got injured and he has not been out [training] since. He’s still in the treatment room and I don’t know if he will be available or not. [He is] 50/50 [to start against Chelsea] at the moment. Apart from Mertesacker, everybody else [from last weekend] should be available.

He’s still out, he has not been in training. He’s not being considered at all.

He’s getting closer. He’s back in full training but is still a bit short physically to go into a game of this intensity.

He’s ready [to step up]. He came on in the FA Cup semi-final and I think if Per is not ready, Gabriel will start.

Arsenal head into the weekend action as the league’s in-form team but despite winning their last eight games on the bounce, they still trail Chelsea by ten points so victory on Sunday is vital if they are to stand any chance of stopping Jose Mourinho’s men from reclaiming the title.