Manchester United will be looking to bounce back when they take on Everton at Goodison Park on Sunday afternoon.

The Red Devils saw any slim hopes of pushing for the Premier League title all-but end with a disappointing 1-0 defeat at Chelsea last weekend, so Louis van Gaal will be looking for a response from his players tomorrow.

United have slipped to fourth following Manchester City’s win over Aston Villa this evening but they can climb up to second with a win ahead of Arsenal’s clash with Chelsea later on Sunday.

Everton have found some good form of late having won four and draw the other of their last five matches which sees them sitting comfortably in mid-table.

Roberto Martinez’s men lost 2-1 at Old Trafford in the reverse fixture but they will take heart from the fact they have won the last two meetings between the two sides at Goodison Park, including a 2-0 win last season.

United have injury problems as Michael Carrick remains out with a calf injury while Phil Jones is also out with an ankle problem.

Marcos Rojo remains on the sidelines with an adductor injury and Rafael has been ruled out for the rest of the season with broken ribs.

However, Daley Blind could return as he’ll face a late fitness test on an ankle injury that he suffered against Man City two weeks ago while Jonny Evans is back in contention after serving his six-game ban.

Everton are likely to be without midfielder Steven Pienaar as he’s a major doubt with a muscle problem but Leon Osman and James McCarthy are expected to be available after returning to training on Friday.

Romelu Lukaku is also set to start after showing no ill-effects having made his comeback off the bench last week against Burnley. 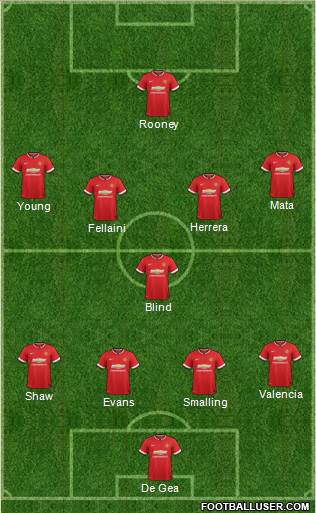 Everton 1-2 Man Utd: United were unlucky to lose at Chelsea last week and have really found their rhythm in recent weeks, so I think van Gaal’s men will edge this one by the odd goal.

Man Utd are the 6/5 favourites to win the game but if you want a little more value, Football-Talk can get you enhanced odds of 6/1 on United to win, plus you get money back if you lose and £100 in free bonus bets.

I also like the look of Juan Mata to open the scoring at odds of 11/1, and if we combine that with a 2-1 United win in a scorecast then we get very tempting odds of 50/1. Surely that’s got to be worth a couple of quid!?