Manchester United are lining-up a €40m bid to beat Liverpool to the signing of Radja Nainggolan with the midfielder set to leave Roma this summer.

As the opening of the summer transfer window approaches, managers are working hard identifying targets and lining-up potential deals so we’ll bring you all the news and gossip. Today, Man Utd are ready to move for Radja Nainggolan…. 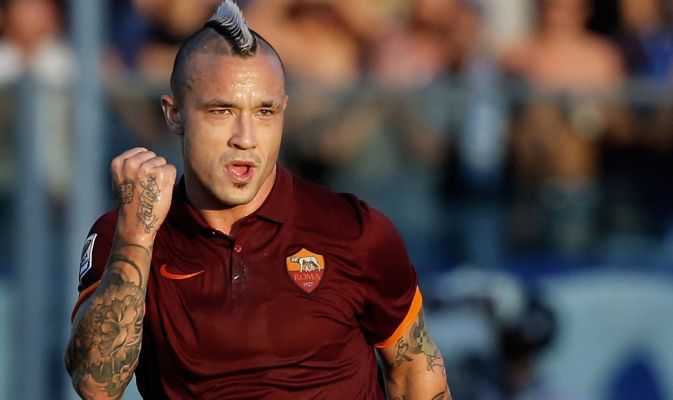 Manchester United are lining-up a €40m bid to beat Liverpool to the signing of Radja Nainggolan as the midfielder gets set to leave Roma this summer, according to reports.

Following a five-year stint at Cagliari, Nainggolan has been in impressive form for Roma since joining the club on an initial loan deal in January 2014.

The 26-year-old  made a permanent switch to the Stadio Olimpico last summer but Cagliari retained 50% of his ownership rights. The Isolani are keen to cash-in their share and with Roma unable to afford to buy the remaining stake, it seems the midfielder is set for a move this summer.

Belgian journalists Kristof Terreur claimed earlier this month that the co-owners were demanding at least €40m (£29m) for his signature.

“Radja Nainggolan is for sale, as AS Roma can’t afford a permanent move.”

“Cagliari and Roma, co-owners, hope to get at least £29m.” Terreur is quoted as saying by the Daily Star

Reports last week suggested that Liverpool were in pole position to sign Nainggolan after Brendan Rodgers supposedly made him a key target as he looks to bring in a replacement for the departing Steven Gerrard this summer.

However, it seems the Merseysiders now have some stiff competition as the Metro are citing reports coming to Italy that claim Manchester United have been scouting him extensively this season and are now set to step-up their interest by tabling a €40m (£29m) offer.

If true, then that figure would meet the asking price set by Roma and Cagliari so the Belgian international would then be given permission to hold formal talks with United about a move to Old Trafford.

Louis van Gaal is expected to bring in a long-term replacement for Michael Carrick this summer and Nainggolan would be an exciting addition and he’d give the Dutchman plenty of options in midfield as he’s able to play a variety of roles.

We’ll have to wait and see how Liverpool respond to this news or whether this supposed bid from United comes to fruition, but I’d love to see the Belgian youngster plying his trade in the Premier League next year, so let’s hope one of the clubs can get a deal agreed.