Brazilian attacker Nathan is on the verge of joining Chelsea after confirming on Twitter that he’s in London to sign his contract and undergo a medical.

As the opening of the summer transfer window approaches, managers are working hard identifying targets and lining-up potential deals so we’ll bring you all the news and gossip. Today, Nathan confirms he’s close to joining Chelsea…. 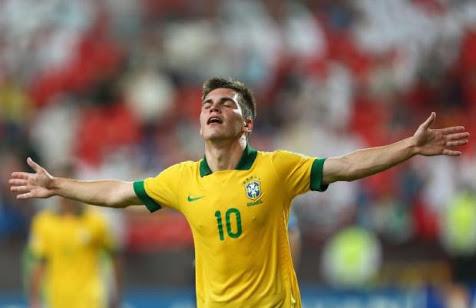 Brazilian attacker Nathan appears to be on the verge of joining Chelsea after confirming on Twitter that he’s in London to sign his contract and undergo a medical.

Chelsea have been strongly linked with Nathan this year and there was speculation earlier this month that suggested the 19-year-old and his agent has flown in to England to hold formal talks with Blues officials about a move from Atletico Paranaense.

It appeared those talks went well as the attacking midfielder took to Twitter to say he was about to fulfill a ‘dream’ while one of his former team-mates congratulated him on Instagram for agreeing a deal to move to Stamford Bridge.

Things went quiet over the last two weeks but it appears Nathan is back in London to put the finishing touches to his move as the youngster has once again taken to Twitter to update his followers by posting a message which translates as ‘Very happy!!! In London to sign my contract with Chelsea and take tests’.

The player soon deleted the post, but not before a screenshot was taken: 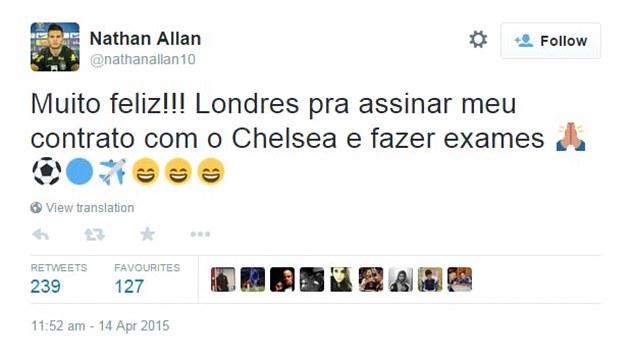 Nathan also uploaded another message, which he’s decided to keep up on the social networking site, saying that he was fortunate to have had a chat with Chelsea stars Eden Hazard, Oscar, Willian, Philip [Luis] and Diego Costa.

All of this points to a deal being close to completion and previous reports have suggested that Chelsea will pay Atletico Paranaense around £4.5m for the exciting attacker.

The youngster burst onto the scene with some impressive performances for the Brazilian under-18’s and he was quickly being viewed as one of South America’s most exciting young talents.

However, with no senior caps to his name yet, Nathan is unlikely to be granted a UK work permit so if he does complete his move to Chelsea, he’ll more than likely be sent out on loan to one of the Blues’ feeder clubs in Europe for a season or two before he’ll be eligible to play for Jose Mourinho’s men.