Man Utd will be looking to bounce back when they take on WBA at Old Trafford on Saturday evening. Here’s the starting eleven I think Louis van Gaal will go with

Manchester United will be looking to bounce back when they take on West Brom at Old Trafford on Saturday evening. Here’s the starting eleven I think Louis van Gaal will go with:

Defence: The newspapers claim that van Gaal was furious after last weeks 3-0 loss at Everton and will make plenty of changes this weekend. Antonio Valencia could get the chop after a poor outing at Goodison Park with Phil Jones coming back in at right-back if he passes a late fitness test.

Marcos Rojo is also set for a recall in place of youngster Paddy McNair with the Argentinean international expected to recover from an abdominal injury to start alongside Chris Smalling, while Luke Shaw should keep his place at left-back.

Midfield: Daley Blind was another who was criticised for his display against Everton and the papers believe he’ll be left-out if Michael Carrick proves he’s over his calf problem.

Juan Mata also disappointed last time out so Angel Di Maria is set for a recall to start his first game since being sent off against Arsenal in the FA Cup. Ander Herrera and Ashley Young should keep their places in midfield.

Attack: Wayne Rooney has been ruled out with a knee injury and may not play again this season. However, Robin van Persie proved his fitness with a brace for the Under-21’s this week so he’s expected to make his first start up front in almost two months. Marouane Fellaini should keep his place in attack. 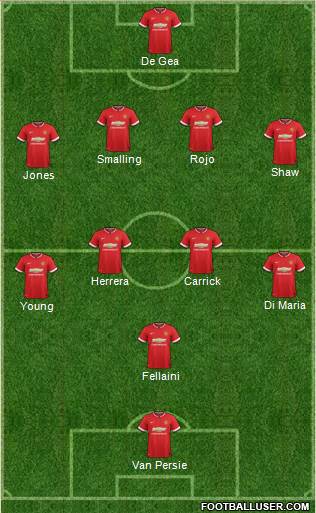