As the opening of the summer transfer window approaches, managers are working hard identifying targets and lining-up potential deals so we’ll bring you all the news and gossip. Today, Man Utd have made contact with Hugo Lloris…. 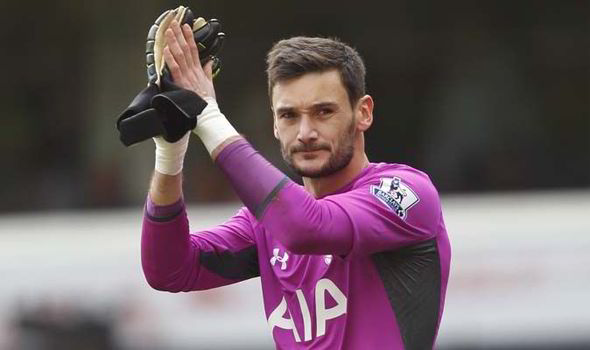 Manchester United have opened formal talks with the agent of Hugo Lloris amid reports that Louis van Gaal is ready to table a £25m for the Tottenham Hotspur star, according to speculation today.

United are understood to be busy identifying potential replacements for David De Gea as the Spaniard is set to enter the final year of his deal and with no extension agreed as yet, the stopper is being strongly linked with a move to Real Madrid.

Obviously United are desperate to keep hold of their Player of the Year but until he commits his future to the club, van Gaal is going to have to make contingency plans in-case they are forced to cash-in this summer.

Tottenham’s Hugo Lloris has emerged as a key target in recent weeks and it seems United have now stepped-up their interest as the Metro are citing reports coming from L’Equipe who claim that they have opened talks with the keeper’s agent about a potential move.

Lloris has been outstanding once again for Spurs this season but there has been suggestions that he’s open to a move away from White Hart Lane in search of Champions League football and it appears United are ready to offer him an escape route if De Gea leaves.

The L’Equipe report comes amid speculation suggesting that United are lining-up a £25m offer for the French international that would also see Victor Valdes move to North London as part of the deal.

I’m sure Tottenham will be desperate to hang on to Lloris for at least another year to help their push for the top four next season but if the player wants out, then perhaps Mauricio Pochettino may decide it’s best to cash-in – especially if they could get a ready-made replacement like Valdes in exchange as well as a sizeable fee.

However, key to any potential deal is De Gea’s future and until the Spaniard decides whether he’ll be signing a new deal at Old Trafford or pushing for a move to Madrid, van Gaal is unlikely to make any firm approach for Lloris.