Arsenal boss Arsene Wenger has confirmed Alex Oxlade-Chamberlain has suffered a new injury set-back which could see him miss the FA Cup final later this month. 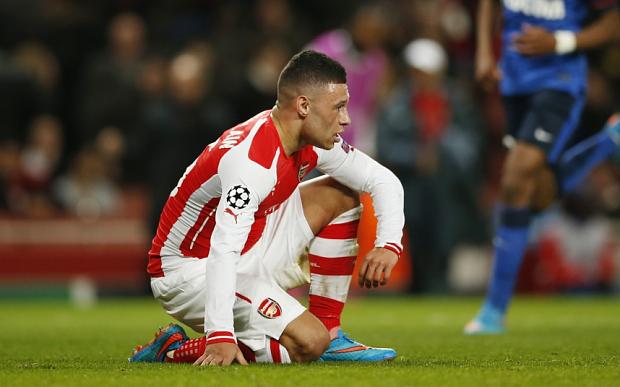 Arsenal boss Arsene Wenger has confirmed that Alex Oxlade-Chamberlain has suffered a new injury set-back which could see him miss the FA Cup final later this month.

Oxlade-Chamberlain hasn’t featured for the Gunners since suffering a hamstring injury during their 2-1 FA Cup quarter-final win over Manchester United at the start of March.

His comeback was delayed after he aggravated a long-standing groin injury but he returned to full training last week and there were hopes he may be in contention for Arsenal’s final three games of the season.

However, speaking at his pre-match press conference this morning ahead of Sunday’s trip to Old Trafford, Wenger has revealed that the midfielder has suffered a fresh set-back after picking up another hamstring problem in training.

The injury isn’t thought to be too serious but it’s set to rule him out of the next two matches against United and Sunderland, and Wenger admits that unless the 21-year-old features against West Brom on the final day of the season, then he’ll be out of the FA Cup final.

It would be a sorry end to another frustrating campaign for The Ox and injury looks set to see him miss his second consecutive FA Cup final after he was ruled out of the 2013/14 clash with Hull due to a groin injury.

Wenger on @Alex_OxChambo: "He won't play next week. If he can be available for West Brom then he may play the final." pic.twitter.com/H2OjAsUT12