Champions Chelsea will look to see-out the rest of the season in style when they face West Brom on Monday. Here is the side I think Jose Mourinho will pick

Premier League champions Chelsea will look to see-out the rest of the season in style when they face West Brom at the Hawthorns on Monday night. Here is the side I think Jose Mourinho will select:

Goalkeeper: Mourinho is likely to hand Petr Cech the gloves for the final game of the season at home to Sunderland in order to give him a warm send off before his expected summer exit, so Thibout Courtois should start tomorrow.

Defence: Filipe Luis came in against Liverpool last week but Cesar Azpilicueta is likely to be restored at left-back against West Brom while Gary Cahill should come in for Kurt Zouma alongside John Terry at centre-back.

Midfield: John Obi Mikel is expected to retain his place in midfield while Nemanja Matic should come back in to the side in place of youngster Loftus-Cheek after being rested against Liverpool.

Attack: Cesc Fabregas should remain in the advanced playmaker role with Oscar still out injured while Juan Cuadrado could be given a run-out on the right-wing with Willian given a breather.

Eden Hazard will keep his place in attack while Mourinho is unlikely to risk Diego Costa from the start as he continues to be cautious over the strikers hamstring problem, so Loic Remy may keep his place up front. 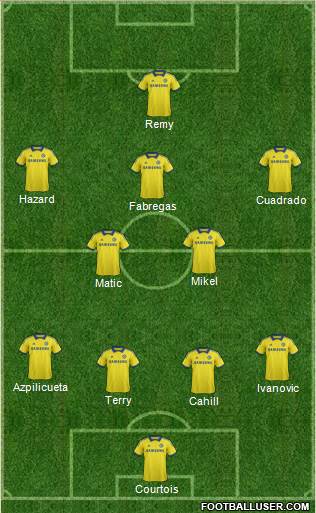