Arsenal, Chelsea and Liverpool have all been offered the chance to land Barcelona attacker Pedro Rodriguez for a bargain €10m this summer, according to reports

As the opening of the summer transfer window approaches, managers are working hard identifying targets and lining-up potential deals so we’ll bring you all the news and gossip. Today, Liverpool, Arsenal and Chelsea are offered the chance to sign Pedro… 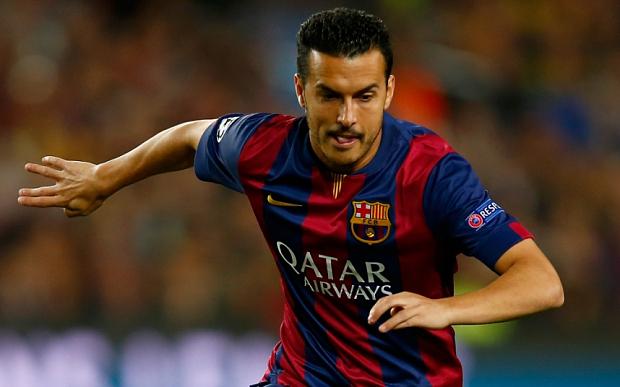 Arsenal, Chelsea and Liverpool have all been offered the chance to land Barcelona attacker Pedro Rodriguez for a bargain €10m this summer, according to the Telegraph.

Pedro has been on Barcelona’s books his entire professional career having joined the club when he was just 17-years-old and he was expected to go on to become a key player after breaking into the first team set-up in 2008.

However, the 27-year-old has failed to hold down a regular starting spot in recent seasons and is now largely used as a squad player with the likes of Neymar, Luis Suarez and Lionel Messi all keeping him out the starting eleven.

Pedro has been restricted to making just seven La Liga starts since Suarez returned from his biting ban in October and this has led to intense speculation linking him with a move away from the Nou Camp this summer.

Barcelona have publicly insisted they don’t want to sell the Spanish international, but it appears privately they have accepted he’s likely to leave this summer as he has just one year remaining on his contract and is unlikely to sign an extension while he’s not a regular.

The Telegraph claim that Barca have now began contacting clubs to offer them the chance to sign Pedro for just €10m (£7m) with Arsenal, Chelsea and Liverpool believed to be among the clubs who have been in touch with the Spaniard’s about a cut-price deal.

If true, that would be an absolute bargain for a player of Pedro’s experience and quality and I’m sure all three clubs would be interested in luring him to the Premier League this summer.

Arsenal could be on the look-out for a replacement for Theo Walcott if he fails to sign a new contract over the coming weeks while Liverpool boss Brendan Rodgers may be forced to look at his options in attack if Raheem Sterling successfully forces his way out of Anfield, and Pedro would be an excellent addition for either club.

However, Chelsea boss Jose Mourinho may renew his interest in the Spaniard after reportedly making an enquiry during the January window and Pedro’s versatility is sure to appeal to the Portuguese coach.

We’ll have to wait and see how things develop over the coming weeks but what’s certain is that someone will be getting one of the buys of the century if they manage to sign Pedro for just €10m this summer, and I’d love to see him playing in the Premier League next season.