Champions Chelsea will look to end the season in style when they face Sunderland at Stamford Bridge on Sunday. Here is the side I think Jose Mourinho will pick

Champions Chelsea will look to end the season in style when they face Sunderland at Stamford Bridge on Sunday afternoon. Here is the side I think Jose Mourinho will select:

Goalkeeper: Mourinho is likely to hand Petr Cech the gloves for the final game of the season in order to give him a warm send off before his expected summer exit if the Czech international is able to overcome a late fitness test. He missed Monday’s loss at West Brom with a calf injury so Thibaut Courtois will retain his place if Cech fails to prove his fitness.

Defence: Filipe Luis has started the last two games so Cesar Azpilicueta is likely to be restored at left-back while Gary Cahill should keep his place alongside John Terry at centre-back as Kurt Zouma has been ruled out of the game.

Midfield: Ruben Loftus-Cheek is set to be handed his third start in a row as he should start alongside Nemanja Matic in midfield. Ramires is out through illness and Cesc Fabregas will serve his one-game ban after being sent-off against West Brom.

Attack: Chelsea have some injury problems in attack as Eden Hazard is a major doubt for the game after undergoing emergency surgery to remove three wisdom teeth. The Belgian international has been unable to train today but Mourinho will give him until the last minute to prove his fitness.

Oscar is still out with a thigh injury so Willian is expected to get a recall while Juan Cuadrado could come in for Loic Remy, with Diego Costa once again leading the line up front. 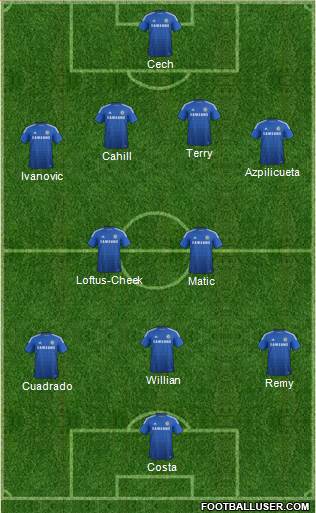