Tottenham take on Everton at Goodison Park on Sunday afternoon. Here’s a preview with team news, likely line-ups and predicted score for the game.

Tottenham will look to secure automatic qualification to the Europa League when they take on Everton at Goodison Park on Sunday afternoon.

Spurs head into the final game of the season sitting in sixth place in the Premier League table – which would be enough to ensure they qualify for the Europa League and avoid having to play a tricky play-off.

However, with Southampton just a single point behind, Mauricio Pochettino’s men need to match the South Coast clubs result away at Man City in order to remain in the driving seat, while Spurs will also be ready to take advantage of any slip-up from Liverpool to sneak fifth.

As it stands, fifth and sixth qualify automatically for the group stages of the Europa League while seventh will be enough to qualify for the preliminary stages, but that will change should Aston Villa win the FA Cup next week as they would take one of the automatic spots.

Everton come into the game with very little left to play for but Roberto Martinez will be desperate to end an inconsistent season on a high note in front of their own fans.

The Toffees came from behind to beat West Ham last weekend thanks to a Romelu Lukaku winner and another win tomorrow will guarantee the Merseysiders will secure a tenth-placed finish in the table.

On-loan winger Aaron Lennon is ineligible to face his parent club so Kevin Mirallas is likely to start on the right-side of attack.

Defender Sylvain Distin is struggling with illness as he looks to play his final game for the club while Antolin Alcaraz – who is also out-of-contract next month – is certain to miss out through injury.

Leighton Baines, Tony Hibbert, Steven Pienaar, Bryan Oviedo and Darron Gibson are all also on the sidelines with injury problems.

Tottenham will assess goalkeeper Michel Vorm following illness but Emmanuel Adebayor won’t play any part as he’s been given permission to return to Togo for family matters.

Kyle Walker remains out with a foot injury while and Ben Davies is recovering from shoulder surgery, but Vlad Chiriches returns from suspension. 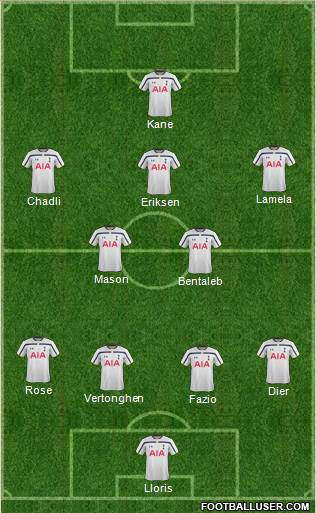 Everton 1-1 Tottenham: Spurs have been in inconsistent form of late but ended a two-game losing run with victory over Hull City last weekend, and I think we’ll see the North Londoners go back to the capital with a point tomorrow. Whether that will be enough to secure sixth-place remains to be seen….