As the opening of the summer transfer window approaches, managers are working hard identifying targets and lining-up potential deals so we’ll bring you all the news and gossip. Today, Arsenal and Chelsea are linked with Zlatan Ibrahimovic…. 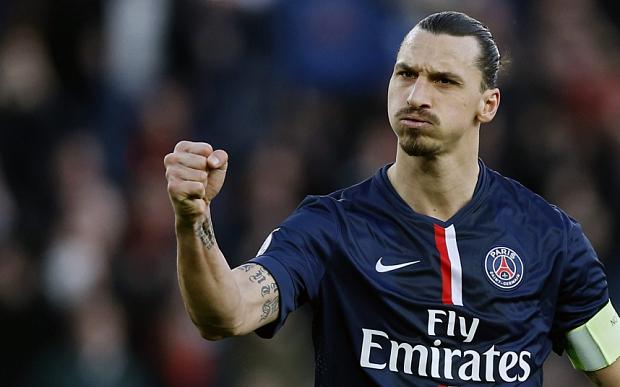 Arsenal are eyeing a bargain €15m move for Zlatan Ibrahimovic but will face competition from Chelsea after the Blues also declared their interest in signing the PSG striker, according to reports.

Ibrahimovic is one of the best strikers in world football and his 30 goals and 8 assists in 37 appearances helped Paris Saint-Germain retain the Ligue 1 title last season.

But the Swedish international’s future at the Parc des Paris is in question with reports suggesting that the 33-year-old has grown frustrated with life in France and is looking for a new challenge this summer.

The uncertainty has now led to speculation over a potential move to the Premier League with the Independent claiming that Arsenal have been alerted to his availability and are now eyeing a move for the striker.

Arsene Wenger is believed to be on the look out for a top class forward to compete with Olivier Giroud next season and the Gunners boss has held a long-term interest in Ibrahimovic having narrowly missed out on his signature way back in 2000.

The striker was on the verge of signing for the North London club and even posed for a photo in his new shirt, but pulled out of the deal after Wenger requested he take part in a trial before completing the move.

Speaking about the move in 2012, Ibrahimovic told reporters:

“Arsene gave me the famous red and white jersey – the No 9 shirt with Ibrahimovic on it and I was so pleased I even posed for a picture wearing it.

“It was a fantastic moment for me. Arsenal had a great team then and here was an Arsenal shirt made just for me.

“So then I waited for him to convince me that I should join Arsenal. But he didn’t even try.

“He never actually made me a serious offer, it was more, ‘I want to see how good you are, what kind of player you are. Have a trial’.

“I couldn’t believe it. I was like, ‘No way, Zlatan doesn’t do auditions’.

“I thought ‘You either know me or you don’t and if you don’t know me you can’t really want me’.”

It would be interesting to see how Ibrahimovic would respond should Wenger renew his interest and try to lure the striker to the Emirates this summer, but they aren’t the only ones on the case.

The Independent also claim that Chelsea have declared their interest in signing Ibrahimovic, while the likes of Liverpool and AC Milan could also enter the chase if the striker really is on the market.

Jose Mourinho needs to bring in another front-man to replace Didier Drogba and he knows Ibrahimovic well from the season they spent together at Inter Milan in 2008/09, and I’m sure the Portuguese coach would love to work with him again in West London.

Ibrahimovic has just one year remaining on his current contract and the newspaper report suggests that PSG will be willing to sell for just €15m (£11m) in order to get his wages off the books and his sale would allow Edinson Cavani to finally play regularly through the middle.

We’ll have to wait and see how this all develops over the coming weeks but I’d personally love to see Ibrahimovic plying his trade in the Premier League. The striker has won titles in Sweden, Holland, Italy, Spain and France but he’s never played in England so surely he’d be tempted to join Arsenal or Chelsea in order to complete the set before he retires?