Arsenal, Chelsea, Liverpool, Man Utd, Man City and Tottenham all found out who they will play next season after the Premier League fixtures were revealed

The Premier League fixtures for the 2015/16 season have been announced this morning so clubs now know who they’ll be facing on the opening day of the new campaign.

Defending champions Chelsea will kick off the new season at home to Swansea City while Arsenal are also at home as they entertain London rivals West Ham at the Emirates.

Liverpool face a tricky test away at Stoke while Manchester City are also on the road away to West Bromwich Albion. Newly promoted Bournemouth take on Aston Villa while Watford are away to Everton and Norwich entertain Crystal Palace at Carrow Road.

However, the key fixture on the opening day is Manchester United welcoming Tottenham Hotspur to Old Trafford.

Here are the opening weekend fixtures: 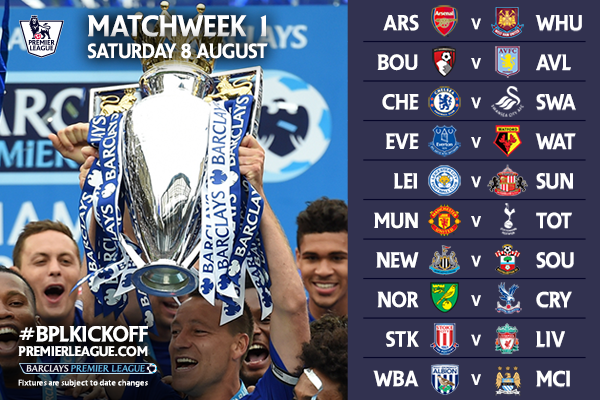 Getting off to a good start is vital and based on the opening six games, it’s difficult to see any particular team having an easier start than any of their rivals. All of the top six have tricky fixtures to navigate during the opening stages of the season so it’s just going to come down to who comes out the blocks quickest.

Following the release of the fixtures, the bookmakers still have Chelsea as favourites to retain the title next season with Manchester City and Arsenal close behind. Liverpool are still at a very tempting 25/1 despite making six new signings already this summer. Perhaps the Merseysiders could be worth a punt at that price?

If you fancy making an early prediction on who’s going to lift the Premier League next year then head over to Red Flush Canada for the best odds. To help make your decision easier, here are the opening six fixtures for all the top teams:

There are plenty of big fixtures to look forward to during the opening few weeks of the new season and I’m sure it’s going to be another fascinating campaign.

I personally think we’ll see Arsenal start strongly but they’ll have to navigate some tricky games against the likes of Liverpool and Stoke before facing the ultimate test away at defending champions Chelsea. If they can get a positive result at the Bridge, then Arsene Wenger’s men should be right in the title mix this season.