With the summer transfer window finally open for business, managers are working hard trying to strengthen their squads ahead of next season so we’ll bring you all the news and gossip. Today, Arsenal and Man Utd are linked with a Serbian midfielder…. 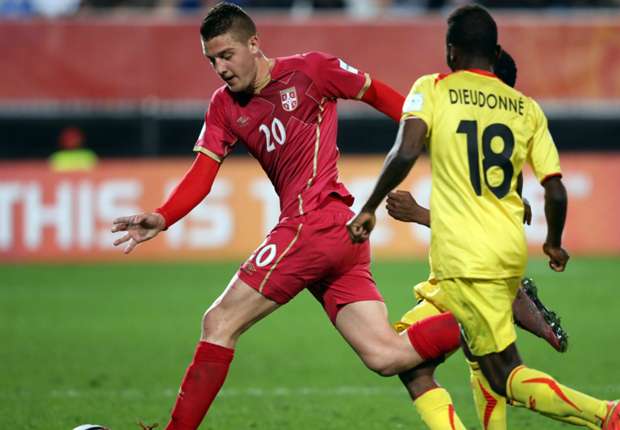 Arsenal and Manchester United have made a formal enquiry to Genk for highly-rated Serbian midfielder Sergej Milinkovic-Savic but will face further competition from Lazio for his signature, according to the Metro.

Milinkovic-Savic began his career with Serbian Super Liga side Vojvodina and came through their youth system before breaking into the first team set-up in 2013 – going on to make 13 appearances that season.

The 20-year-old did enough to earn a move to Genk last summer and he’s continued to impress in Belgium with 5 goals in 24 appearances, while the midfielder has also become a regular in the Serbian under-21 national team.

It seems his potential has also caught the eye of top teams in England as the Metro are citing reports coming from Italy that claim Arsenal and Manchester United are showing a keen interest in the young midfielder this summer.

The newspaper suggests that the Premier League duo have already made contact with Genk to express their interest and make a formal enquiry over Milinkovic-Savic’s situation.

However, it looks like the pair are going to face stiff competition from Serie A as the report – which originates from Italian outlet Tuttomercatoweb – claims that Lazio are leading the chase and have already seen an opening £4.3m offer rejected.

It remains to be seen whether Arsenal or United will now step-up their interest and submit offers of their own, but it will be interesting to see if either club manage to lure the youngster to England this summer.

Arsene Wenger is likely to bring in another holding midfielder to compete with Francis Coquelin while United boss Louis van Gaal is also expected to be on the market for a player to help ease the load on Michael Carrick, but I’d be surprised if either manager was looking at Milinkovic-Savic for immediate first team action.

Although he’s shown huge potential, the Serb is still only 20 and has very little experience of top level football, so I’m guessing that if Arsenal or United do sign him this summer, he’ll play for the youth team for at least a season or two before pushing for the first team.

That means I’m still expecting Wenger and van Gaal to bring in a more established central midfielder over the coming weeks, so we’ll have to wait and see who they go for on that front.