With the summer transfer window finally open for business, managers are working hard trying to strengthen their squads ahead of next season so we’ll bring you all the news and gossip. Today, Liverpool make their move for Denis Cheryshev…. 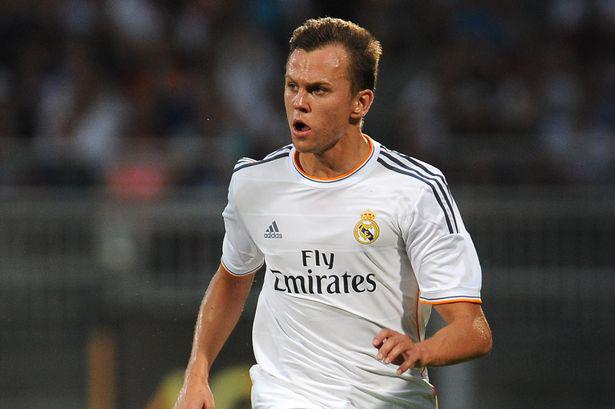 Liverpool have submitted a £22m bid to Real Madrid for winger Denis Cheryshev as Brendan Rodgers looks to bring in a replacement for Manchester City-bound Raheem Sterling, according to the Mirror.

After months of speculation, the BBC reported on Sunday that Liverpool and City had reached an agreement for the sale of Sterling with the Citizens set to pay an eye-watering £49m for the unsettled 20-year-old attacker.

Although the move is not yet officially complete, Sterling’s impending departure will leave a huge void to fill in the Liverpool attack and it appears Rodgers has now identified his key target as the Mirror claim he has submitted a £22m bid for Real Madrid winger Denis Cheryshev.

The Russia international has spent the previous two seasons on loan at Villarreal and Sevilla but faces an uncertain future at the Bernabeu as new boss Rafa Benitez already has an array of attacking talent to choose from.

The newspaper suggests that Benitez will discuss Liverpool’s offer with senior Madrid officials but they are likely to cash-in and they would prefer the straight cash deal the Merseysiders are offering rather than another loan which is on the table from Villarreal.

So it looks like Liverpool are in pole position to secure a deal and Rodgers has moved swiftly to replace want-away attacker Sterling, and he’ll still have plenty of money left over to strengthen other areas of the squad.

Cheryshev is a tricky winger who predominantly plays on the left but is also capable of playing on the right so he’ll give Rodgers plenty of options in the final third if he does complete a move to Anfield this summer.

The 24-year-old came through the Madrid youth ranks having joined the club as a child in 2002 but has been unable to force his way into the starting eleven so it appears he may now be set for a new challenge here in the Premier League.

However, we’ll have to see how things develop and there is still a long way to go before a deal is complete but I think Cheryshev would be a risk worth taking for Liverpool as he has all the attributes needed to be a top player.