With the summer transfer window finally open for business, managers are working hard trying to strengthen their squads ahead of next season so we’ll bring you all the news and gossip. Today, Man Utd are linked with Robert Lewandowski…. 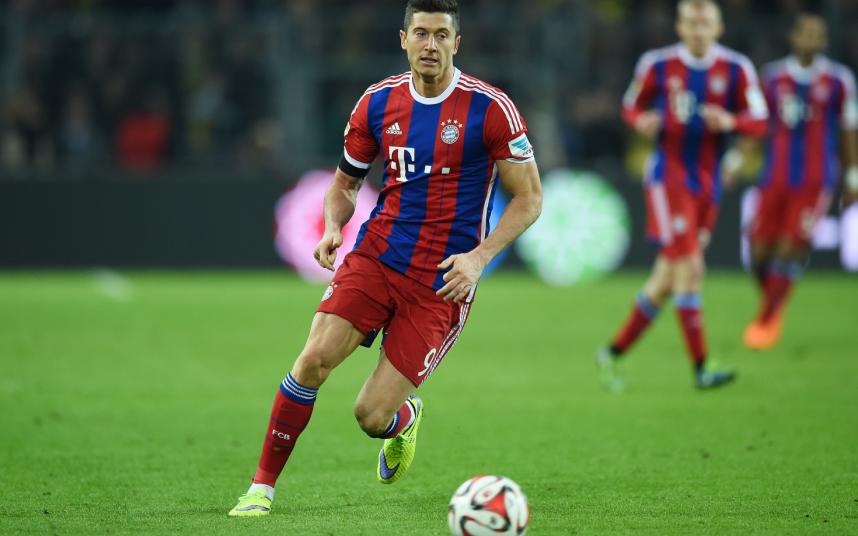 Manchester United have made Robert Lewandowski one of their latest key transfer targets but have been warned a deal would cost well in excess of £35m, according to the Telegraph.

Louis van Gaal has been extremely busy in the market so far this summer and wrapped-up a triple swoop over the weekend with the signings of Bastian Schweinsteiger, Morgan Schneiderlin and Matteo Darmian.

But with Robin van Persie sealing his move to Fenerbache earlier today [via ESPN], I fully expect United to bring in at least one top class striker this summer and it appears van Gaal has an ambitious target in mind.

The Telegraph claim that Bayern Munich striker Robert Lewandowski is firmly on the Dutch boss’s radar with United believed to be eyeing an audacious swoop for the Polish international hitman.

Lewandowski only moved to the Allianz Arena last summer after completing a free transfer move from Borussia Dortmund so it’s highly unlikely Bayern will be keen on selling the striker just yet, but that doesn’t appears to have deterred van Gaal from at least giving it a go.

The 26-year-old’s agent, Cezary Kucharski, has spoken out amid the speculation to warn United that any potential deal would cost well in excess of £35m and although he confirmed that the striker’s next move will be to either England or Spain, he doesn’t envisage Bayern doing business any time soon.

Kucharski is quoted as saying by the Telegraph:

“I think it would have to be a very high offer, definitely higher than €50m (for Bayern to consider selling.)

“Robert is one of the most valued strikers on the market who guarantees goals, guarantees assists, excitement. He has shown that over many years during his career.

“Every year he is an even better player and plays at a higher level and that is very important for other clubs because he has credibility and guarantees at least 30 goals a season.

“With a player of Robert’s class, the truth is that not a lot of work is required because really there are only two directions in which he could go in the future, England or Spain, and only with Bayern Munich’s acceptance.”

“There must be a signal from the club, from Munich, there is no such signal so we are not thinking about it, because even thinking about a change of club would be unfair in my opinion to the current employers.

“There is no reason, apart from money to be honest, to even think about it.

“Bayern would have to think about why they would get rid of Robert Lewandowski? It seems to me that there is no reason to even think about it.”

Lewandowski would obviously be a sensational signing for United and I think he’d be a steal if they could persuade Bayern to sell for £35m as he’s scored at least 25 goals in each of his last four seasons.

Unfortunately I don’t think there’s much hope of a deal happening this summer – particularly after United just lured Bastian Schweinsteiger away from the Allianz – so van Gaal is probably going to have to look elsewhere for his striker.

There have been reports suggesting United are also eyeing Edinson Cavani [via Express]and I think there’s far more chance of a deal being done with PSG for the Uruguayan, so perhaps van Gaal should just concentrate on that rather than wasting time on Lewandowski.