Arsenal are ready to table an offer worth over £30m for Borussia Dortmund striker Pierre-Emerick Aubameyang after seeing their opening £28.7m bid rejected

With the summer transfer window finally open for business, managers are working hard trying to strengthen their squads ahead of next season so we’ll bring you all the news and gossip. Today, Arsenal are linked with Pierre-Emerick Aubameyang…. 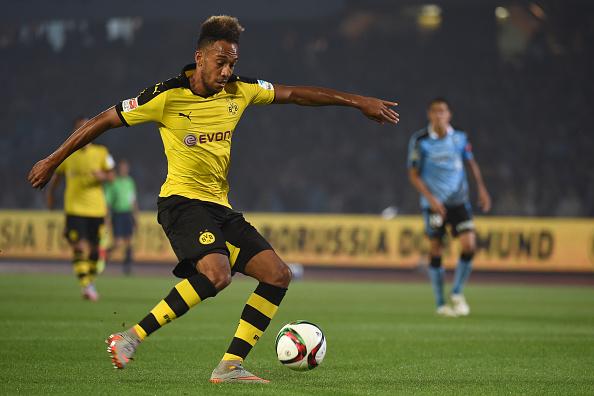 Arsenal are ready to table an improved offer worth in excess of £30m for Borussia Dortmund striker Pierre-Emerick Aubameyang after seeing their opening £28.7m bid rejected, according to the Express.

Aubameyang made his name at Saint-Etienne before earning a big-money move to Dortmund in 2013 and the pacey attacker has continued to impress in German having scored 26 goals in all competitions last season.

His excellent form has attracted interest from the Premier League with the Express citing reports coming out of Germany which claim Arsenal are set to make an improved offer worth over £30m after seeing their opening £28.7m bid rejected by Dortmund.

The newspaper suggests that the German giants have made it clear they won’t accept anything below £31m for the Gabon international after selling fellow striker Ciro Immobile to Sevilla earlier in the summer.

However, it appears we’re now ready to test their resolve with a new and improved offer which should be much closer to their asking price, so it will be interesting to see how they respond this time around.

I’ve said for many weeks that we need to bring in a top class forward if we want to cement ourselves as genuine title challengers and while I think someone like Karim Benzema would be ideal, Aubameyang would certainly be an adequate alternative.

The player is known for his blistering pace and while he’s predominantly used as a winger, he is also capable of playing as a centre-forward, so he’d give Arsene plenty of options in the final third next season.

With 41 goals in 95 appearances for Dortmund over the last two years, it’s clear that Aubameyang knows where the goal is but the question is whether he could replicate that form in the Premier League.

I personally think he has all the attributed needed to be a success here but it’s always a gamble when you bring someone in from abroad, so if we can’t land the likes of Benzema this summer, then I’d be more than happy to see us sign Aubameyang.