Arsenal are ready to push ahead with their attempts to sign Sergi Samper by tabling an £8.4m bid to trigger the release clause in his Barcelona contract

With the summer transfer window in full swing, managers are working hard trying to strengthen their squads ahead of next season so we’ll bring you all the news and gossip. Today, Arsenal are linked with Sergi Samper…. 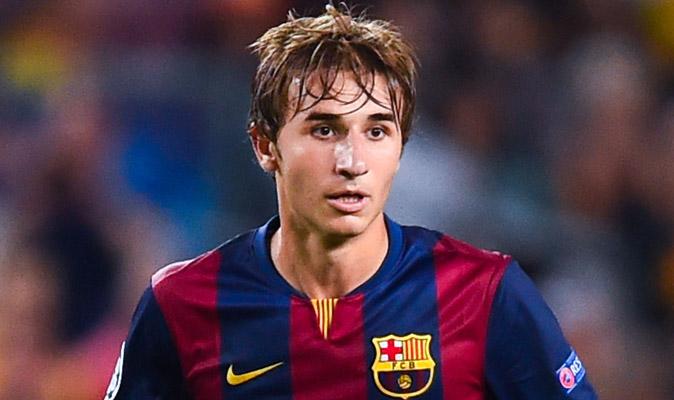 Arsenal are ready to push ahead with their attempts to sign Sergi Samper by tabling an £8.4m bid to trigger the release clause in his Barcelona contract, according to the Express.

Samper has been with Barca since the age of six and graduated from the much-famed La Masia Academy before progressing through the ranks to establish himself with the B squad in 2013.

While the 20-year-old has been hugely impressive with the reserve side, he has found it difficult to break into the first team set-up as the midfielder is yet to make his La Liga debut and has just 4 appearances in all competitions to his name.

Samper’s potential has caught the eye of a certain Frenchman with the Express suggesting that Arsene Wenger has been keeping a close eye on the youngsters progress and even tried to lure him to the Emirates when we snapped-up Hector Bellerin in 2011.

It seems we’re about to have another go at prising the defensive midfielder away from the Nou Camp as the Express are citing a report coming from Spanish outlet Mundo Deportivo who claim that Wenger is set to trigger his release clause with a €12m (£8.4m) offer.

We’ll have to wait and see how the player responds if we do table such a bid but the Daily Mail suggest that Samper is tempted by the move to Arsenal as he knows his first team chances at Barca are limited.

Sergio Busquets, Javier Mascherano and even youngster Sergi Roberto are all ahead of him in the pecking order so it wouldn’t be a surprise if the midfielder was keen on a move away from the Nou Camp this summer, and Arsenal are closing-in on his signature.

Although he isn’t the most physical central midfielder, the Spanish U21 international is known for his superb range of passing so it looks like he’d be considered as a long-term replacement for Mikel Arteta.

Samper has two years left on his current contract and Luis Enrique is keen to keep hold of the youngster, but there is little the Catalans can do to prevent him leaving if Arsenal trigger his release clause.

Many fans hoped we’d sign an experienced defensive midfielder this summer but we’ve passed up on some key targets so it looks as though Wenger may be ready to stick with Francis Coquelin as his first choice and bring in a youngster like Samper to support.

If we pull off a deal, the Spaniard could learn the ropes from the likes of Arteta over the next 12 months before making a real push for the first team, so as long as Coquelin doesn’t get injured this season, it could end up being a shrewd move by Arsene.

The boss has been very quiet in the transfer market this summer as if we sign Samper, he’ll become just our second major new addition to the summer following Petr Cech’s arrival from Chelsea.