With the summer transfer window in full swing, managers are working hard trying to strengthen their squads ahead of next season so we’ll bring you all the news and gossip. Today, Arsenal are linked with Robert Lewandowski…. 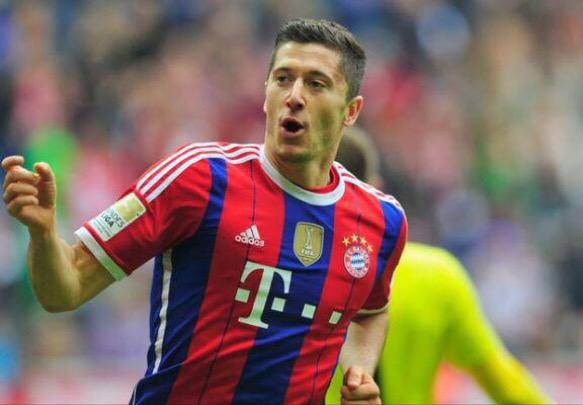 Arsenal could be set to battle-it-out with Manchester United as Arsene Wenger will make a move for Robert Lewandowski if he fails to land Karim Benzema this summer, according to the Express.

Wenger has been fairly quiet in the transfer market so far with Petr Cech the only new face to arrive at the Emirates but the French boss is expected to bring in a new front-man at the very least before the window slams shut.

Several names have been linked with a move to North London but Benzema has emerged as Wenger’s prime target with the Express reporting earlier this month that the 27-year-old has already held talks with the Arsenal boss about a potential move.

However, it’s going to be difficult to persuade Real Madrid to cash-in on the former Lyon hitman and it appears Wenger has a back-up plan in mind if a move for Benzema falls through.

The Express are citing a report from Spanish outlet El Confidential who claim that Arsenal will turn their attention to Bayern Munich striker Robert Lewandowski if they fail to sign Benzema this summer.

I personally think Arsenal need to sign another top class striker if they want to be considered as genuine title challengers next season and obviously Lewandowski would be an ideal addition for the North Londoners.

However, the Polish international has also been strongly linked with a move to Manchester United in recent weeks with the Telegraph reporting earlier this month that Louis van Gaal had made the 26-year-old one of his key targets.

United have been extremely busy in the transfer market this summer but I expect van Gaal to sign another forward after allowing Robin van Persie to join Fenerbache and passing up the chance to sign Radamel Falcao on a permanent basis.

Lewandowski would clearly be a sensational signing for either Arsenal or United as he’s one of the best all-round strikers in the world but I just don’t see Bayern selling the player any time soon.

They’ve just sold Bastian Schweinsteiger to United so the pressure is already on the club’s board so I personally don’t think the German giants would even contemplate cashing-in on a player as important as Lewandowski this summer.

Therefore, I think Arsenal are going to have to pray they can lure Benzema away from the Bernabeu while United will also have to turn their attention elsewhere in their search for a top class striker.