Real Madrid have responded to speculation Karim Benzema is set to join Arsenal or Man Utd after he posted a cryptic message on Instagram earlier today.

With the summer transfer window in full swing, managers are working hard trying to strengthen their squads ahead of next season so we’ll bring you all the news and gossip. Today, more on the future of Karim Benzema….

Real Madrid have played down speculation suggesting Karim Benzema could be joining Arsenal or Manchester United after the striker posted a cryptic message on social media this afternoon, according to the Independent.

Benzema has been heavily linked with a move to Arsenal in recent weeks with the Express reporting earlier this week that the Gunners had tabled an improved £35m bid having seen their opening £31m offer rejected by Madrid.

The North Londoners aren’t the only Premier League club credited with an interest in the French international as the Independent claim that Man Utd have also been eyeing a move for Benzema this summer with Louis van Gaal supposedly looking to buy a ‘surprise’ striker.

Fans of Arsenal and United were sent into a spin this afternoon after Benzema posted a photo on his Instagram account of him sitting on a private jet with a cryptic message saying ‘let us leave the past in the past’ with a hashtag that translates to ‘towards the future’.

Obviously this sent the rumour mill into overdrive with fans of both Arsenal and United speculating that the 27-year-old could be flying-in to secure a move to their club and to add to mystery, the photo was uploaded as the rest of the Madrid squad were flying to Shanghai ahead of their friendly with AC Milan on Thursday.

However, Sky Sports News reporter Bryan Swanson appears to have ended talk of a possible move as he claims that Real Madrid told him that Benzema is with the rest of the squad in Shanghai and the photo of the player on a private jet was an old one from his holidays. 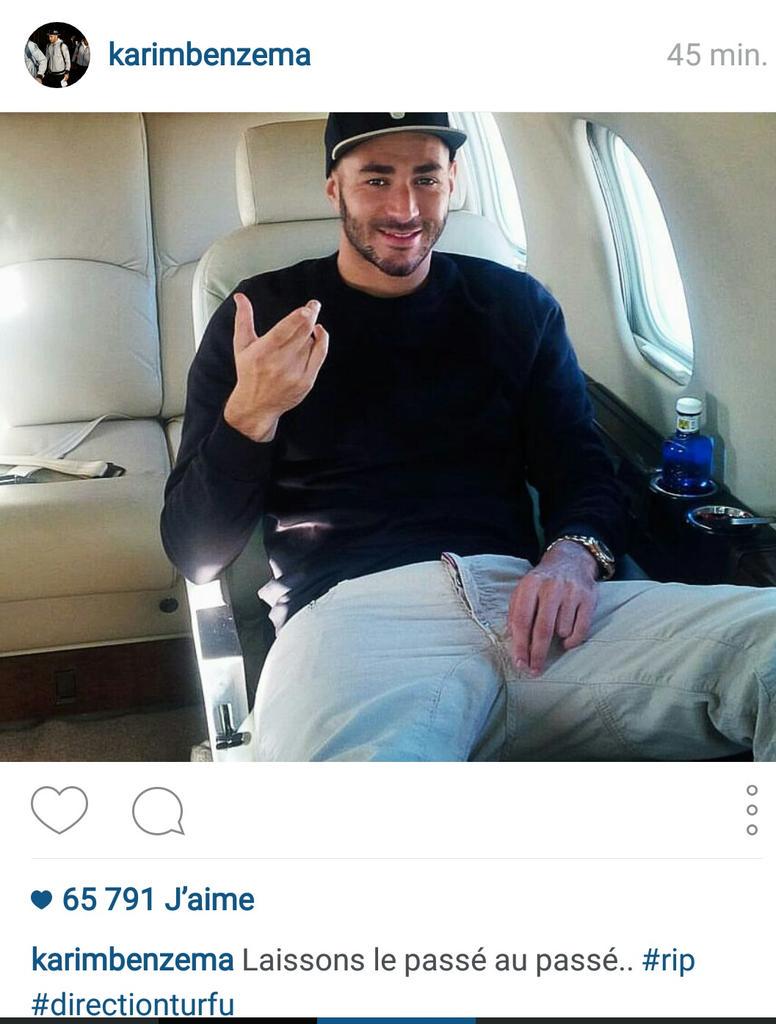 Real Madrid say Karim Benzema still with squad in Shanghai before next game against AC Milan. Private jet pic? Believed to be from holiday.

So, what do we believe? Is Benzema just having a bit of fun and he really is with the Madrid squad? Or could he be about to start a new chapter in his career?

You’d expect Madrid to play down any transfer talk. Even if a move was on the cards, they’d deny it until all parties were ready to officially announce it. I personally think there is more to this as there has been no sign of Benzema in any of the photos after the Madrid players arrived in China this afternoon.

The striker was also an unused substitute in Madrid’s 3-0 win over Inter Milan yesterday and the former Lyon man trained away from the rest of the first team with a mysterious ‘injury’.

All of this just adds to the speculation that he could be unsettled at the Bernabeu and if he is set for a move, I think the Premier League would be his most likely destination and he’d be a sensational signing for either Arsenal or United.

Let’s see how things develop over the coming hours and days. We might see footage of the striker in Shanghai and put all this to bed, but as long as there’s no sign of him the speculation is going to continue….