Arsenal have announced that Theo Walcott and Santi Cazorla have both committed their futures to the club after signing new contract extensions. 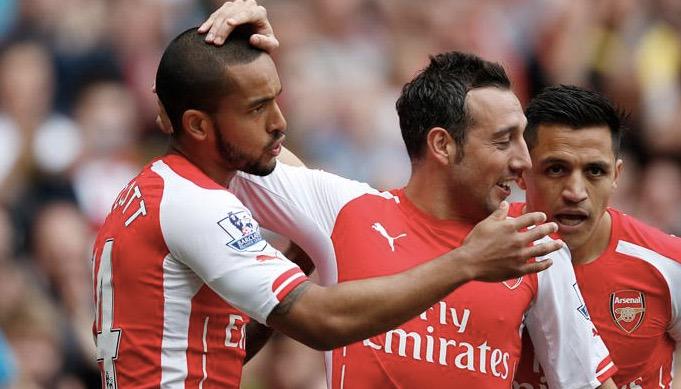 Arsenal have announced that Theo Walcott and Santi Cazorla have both committed their futures to the club after signing new contract extensions.

Walcott was in the final year of the contract he signed just 18 months ago and there has been speculation linking him with a possible move away from the Emirates in recent weeks.

However, after hinting last week that a deal was close, the 26-year-old has now committed his future to the Emirates after signing a new four-year contract.

Walcott has taken to Twitter to express his delight at penning his new deal, calling Arsenal is ‘home’, while the club announced the news on Arsenal.com a short time ago.

No official confirmation has been made over how much Walcott is now on, but the Guardian claim the new deal is worth £140,000-a-week, which will make him one of the clubs highest earners.

Some fans are questioning why Theo deserves such a pay rise given that he’s been out injured for the majority of the 18 months since he signed his last deal, but it was too dangerous to let him remain in his final year so we had little option but to pay him the going rate.

£140,000-a-week is a lot of money but I’m delighted Theo has committed his future to Arsenal and the news comes as a double boost as we’ve also tied Santi Cazorla down to fresh terms today.

The club confirmed on Arsenal.com that the midfielder has signed an extension, but there are no further details om how long the new contract will run for. Sanit has also taken to Twitter to express his delight at his new deal, but only said it was ‘long-term’.

Cazorla has also been linked with a move away with speculation suggesting he could head back to Spain, but I was always confident he’d stay and the fact he’s signed a new deal just confirms his commitment to the club.

The 30-year-old has become a key part of our team since moving into the middle of the park so it’s great news that he’s now going to be seeing out his best years at Arsenal.

“We’re delighted to have extended the contracts of Santi and Theo. Both are top quality players who are hugely important and influential to our squad.

“As well as their huge contributions on the pitch, they both have a great deal of experience and are very popular off the pitch. We’re very pleased with them both signing contract extensions, as it provides our squad with further stability of quality.”

Things are looking very positive at Arsenal right now. We’ve got a great squad, can invest in top class players again, we no longer have to sell our best players and key men are now staying here rather than joining our rivals for the money.

Hopefully we can really push on this season and mount a serious title challenge….

Ready for the season ahead. Thank you to @Arsenal & Key Sports Management. #COYG !!!!! pic.twitter.com/ohb7aE9KLU

So happy to sign a new long-term contract! Thank you to @Arsenal and the #arsenalFans! pic.twitter.com/edSGIe3rS0