Manchester United may make a move for Real Madrid defender Pepe after they wrap-up a deal for Barcelona attacker Pedro Rodriguez, according to the Mirror.

With the summer transfer window in full swing, managers are working hard trying to strengthen their squads ahead of next season so we’ll bring you all the news and gossip. Today, Man Utd eye Pepe…. 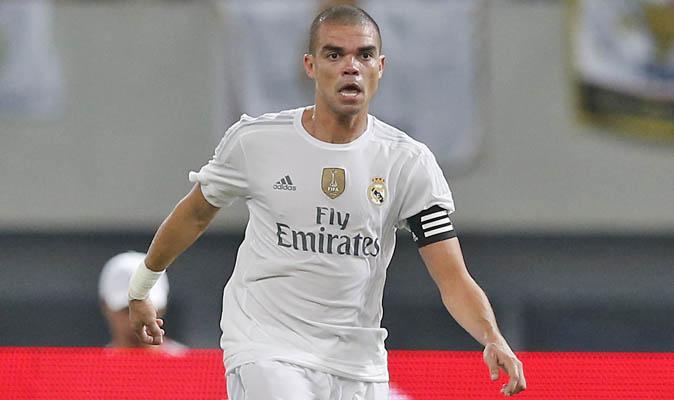 Manchester United may make a move for Real Madrid defender Pepe after they wrap-up a deal for Barcelona attacker Pedro Rodriguez, according to the Mirror.

Louis van Gaal has already been busy in the transfer market this summer with five new faces coming through the door but it appears the Dutchman is still looking to further strengthen his squad before the window closes.

United have been strongly linked with a move for Barcelona attacker Pedro in recent weeks and the Mirror claim that van Gaal is hoping to wrap-up a deal in the next 48 hours after offering the player a four-year deal to move to Old Trafford.

A fee has still not been agreed between the two clubs with the newspaper suggesting Barca are still demanding the full value of Pedro’s release clause, but a compromise deal should be settled upon soon which would see the Spaniard become United’s sixth major summer signing.

Once the Pedro deal is sealed, it will then allow van Gaal to focus his attention on bringing in a new centre-back and the Mirror claim that after missing out on Sergio Ramos, the United boss may turn his attention to team-mate Pepe.

The Portuguese star has been on the books at the Bernabeu since joining the club from Porto in 2007 and he’s enjoyed an illustrious career at Madrid having helped the club win a whole host of honours including 2 La Liga titles and the Champions League.

However, the Mirror suggest that Pepe is set to fall down the pecking order with new boss Rafa Benitez expected to start with Raphael Varane and Ramos as his starting centre-back pairing, and Madrid are now supposedly offering the 32-year-old around potential suitors….including United.

The report states that van Gaal is now considering making a move for the experienced international but it remains to be seen whether he’ll formalise his interest with an offer or move on to other targets.

I’m personally not a huge fan of Pepe’s and think United would be better off targeting someone much younger who van Gaal can build his new-look defence around. Someone like John Stones at Everton would be ideal.

But obviously the final decision is with van Gaal and he may feel it’s too good an opportunity to turn down as Pepe is a quality defender who would bring a huge amount of experience with him if he moved to United.

Let’s see how things develop over the coming weeks but it appears United are intent on signing another central defender this summer, we’ll just have to wait and see if Pepe is the man they go for….