Manchester United have a verbal agreement in place to sign Nicolas Gaitan and the attacker will play his final game for Benfica on Sunday ahead of a £21.1m move

With the summer transfer window in full swing, managers are working hard trying to strengthen their squads ahead of the new season so we’ll bring you all the news and gossip. Today, Man Utd close in on Nicolas Gaitan… 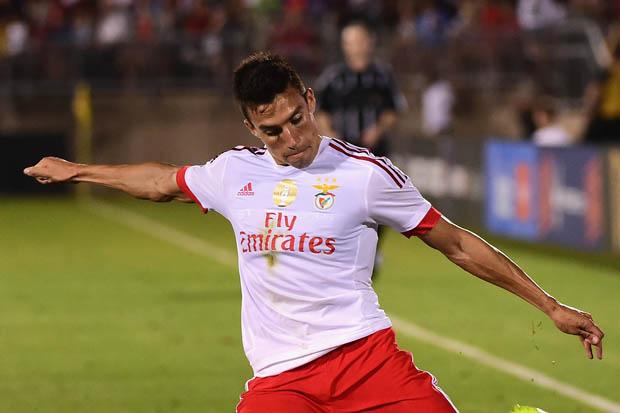 Manchester United have a verbal agreement in place to sign Nicolas Gaitan and the attacker will play his final game for Benfica on Sunday ahead of a £21.1m move to Old Trafford, according to the Metro.

United have long been linked with Gaitan and this summer has been no different with the Metro reporting way back in May that Benfica president Luis Filipe Viera had flown to England to hold face-to-face talks over a potential deal.

The Express then carried quotes from Rafael da Silva’s agent, Cassiano Pereira, who claimed that the two clubs were in negotiations over a possible swap deal involving the Brazilian right-back.

“Benfica and Man United are in negotiations over Gaitán and one offer includes Rafael to join Benfica,” Pereira is quoted as saying in the Express

“Rafael wants to join Benfica. It’s a big European club. If the talks proceed, it won’t be difficult to reach an agreement.”

Rafael has since moved to Lyon but it appears United and Benfica have continued to negotiate a deal for Gaitan and it sounds like they may have found a happy conclusion.

The Metro are citing reports coming out of Portugal today which claim that a verbal agreement has been reached that will see the Argentinean international join United in a £21.1m deal.

The newspaper says that Gaitan will play his final game for Benfica on Sunday and despite late interest from Valencia, United have supposedly exercised their first refusal option to snap-up the talented winger.

With so much speculation circulating in the worlds media these days it’s difficult to know what to believe but these reports come just a few days after the Express claimed that United were just ‘hours away’ from sealing a deal to sign Gaitan.

The problem is we’ve heard all these rumours before and nothing has ever come of it so I’m not sure whether United have finally decided to make a move for the 27-year-old, or if his agent is just be using their name to drum up interest in his client.

If Gaitan is on his way to Old Trafford, then I suspect he would be coming in as a replacement for Angel Di Maria but it would have to cast doubt over United’s proposed move for Barcelona attacker Pedro.

The Spaniard has also been strongly linked with a move to United [via Goal] and I don’t see Louis van Gaal signing both Pedro and Gaitan this summer, so it will be interesting to see which player eventually arrives.

I personally think this Gaitan stuff is all paper talk and fully expect to see Pedro sign for United before the transfer window closes, but I suppose you never know in football and until the window closes, anything can happen.