Tottenham get their Premier League season underway when they take on Manchester United on Saturday. Here is the side we think Pochettino will select.

Tottenham get their Premier League season underway when they take on Manchester United at Old Trafford on Saturday afternoon. Here is the side we think Mauricio Pochettino will select for the game:

Goalkeeper: Spurs were handed a huge boost when Hugo Lloris made his comeback with an appearance against AC Milan on Wednesday night. The Frenchman was expected to miss the start of the season after fracturing his wrist but having played for 35 minutes pain free in midweek, he could now start on Saturday.

Defence: Pochettino is set to hand a competitive debut to summer signing Toby Alderweireld with the Belgian international expected to start alongside compatriot Jan Vertonghen in the centre of defence.

Kyle Walker should get the nod over Kieran Trippier at right-back while Danny Rose should keep his place on the left ahead of Ben Davies.

Midfield: Spurs are unlikely to make too many changes from the midfield we saw line-up for much of last season with Ryan Mason partnering Nabil Bentaleb in front of the defnece and Christian Eriksen deployed in the attacking midfield position.

Attack: Nacer Chadli has enjoyed a positive pre-season and should start on the left side of attack while Erik Lamela may get the nod over Andros Townsend on the right. Harry Kane was rested against AC Milan in mid-week and is expected to spearhead the attack in a very familiar Spurs line-up.

Here is how I think we’ll see Spurs line-up against Man Utd: 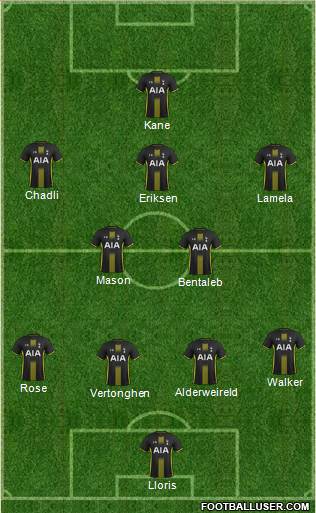