Manchester City entertain Chelsea at the Etihad Stadium on Sunday afternoon. Here is the starting eleven I think Manuel Pellegrini will go with for the game:

Manchester City entertain Chelsea at the Etihad Stadium on Sunday afternoon in what is the first titanic clash of the new season. Here is the starting eleven I think Manuel Pellegrini will go with for the game:

Goalkeeper: No question here, Joe Hart will start in goal this weekend.

Defence: Pellegrini is expected to bring Pablo Zabaleta back in to the starting eleven after resting him on Monday night. Bacary Sagna is the man set to drop out.

Otherwise, the back four should remain unchanged from the side that kept a clean sheet at the Hawthorns meaning Eliaquim Mangala will partner Vincent Kompany in the middle of defence with Alexandre Kolarov at left-back. Gael Clichy is back in training but may just be a little short of fitness.

Midfield: Fabian Delph remains out with a hamstring injury while Fernando joins him on the sidelines after picking up a knock in training. The good news is Yaya Toure has been passed fit despite being taken off against WBA holding his hamstring. The Ivorian should therefore line-up alongside Fernandinho.

Attack: The big news is that Sergio Aguero is expected to start up front after training all week. The Argentinean returned late to pre-season but came off the bench on Monday night and is now considered fit to start.

The rest of the attack should remain unchanged which means Jesus Navas could keep his place ahead of Samir Nasri, with David Silva and Raheem Sterling almost certain to start. 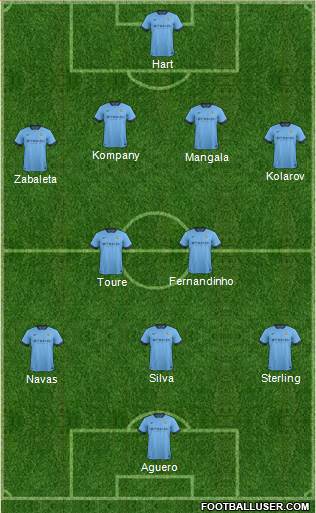