Arsenal will look to make it two wins on the bounce when they take on Liverpool at the Emirates on Monday night. Here is the side we think Wenger will select.

Arsenal will look to make it two wins on the bounce when they take on Liverpool at the Emirates on Monday night. Here is the side Gooner Mac thinks Arsene Wenger will select for the game:

Goalkeeper: Petr Cech had a debut to forget but followed that up with a solid outing against Crystal Palace last weekend. No doubt he’ll be selected between the sticks again on Monday.

Defence: Hector Bellerin returned from a knock last weekend and I expect the young Spaniard to continue at right-back. The boss is unlikely to make any changes to his defence so Per Mertesacker, Laurent Koscielny and Nacho Monreal are likely to keep their places.

Midfield: Wenger restored Santi Cazorla alongside Francis Coquelin last Sunday and I expect we’ll see that partnership again in the middle of the park. Jack Wilshere is back in training but this game will come too soon.

Attack: With Cazorla in the middle, Aaron Ramsey will be forced to play out on the right again. I’m not a fan of him out there but Arsene obviously feels he has to shoe-horn him into the team so the Welshman will most likely to on the wing again on Monday with Theo Walcott and Alex Oxlade-Chamberlain among the subs.

Alexis Sanchez came through the game at Selhurst Park unscathed and the boss says he’s fit to start so the Chilean will keep his place in the attack alongside Mesut Ozil.

Olivier Giroud silenced his critics with a fine goal against Palace so he should lead the line up front once again. 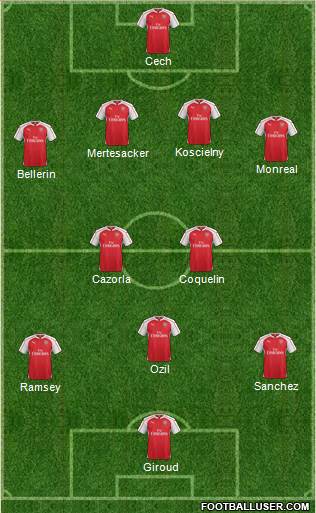