With the summer transfer window approaching it’s climax, managers are working hard trying to strengthen their squads for the new season so we’ll bring you all the news and gossip. Today, Arsenal are linked with Riyad Mahrez…. 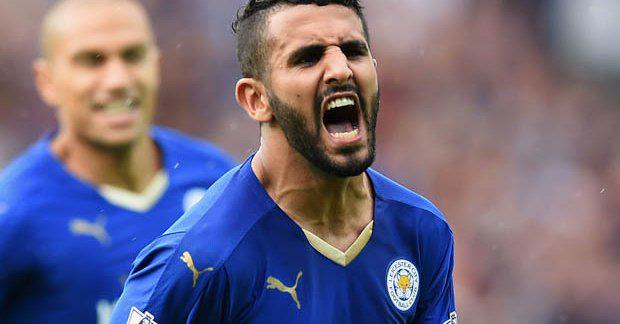 Arsenal are showing a keen interest in Leicester City attacker Riyad Mahrez as Arsene Wenger looks to try and strengthen his options during the closing stages of the summer transfer window, according to the Daily Star.

The boss has been hotly tipped to bring in another attacker over the next 48 hours and while we’re being linked with big-money moves for world class players abroad, it appears we may actually be looking a little closer to home.

The Daily Star claim that Arsene is now eyeing a surprise move for Leicester City’s Riyad Mahrez after he added the Algerian international to his list of potential long-term transfer targets.

It’s not made clear in the newspaper report whether the boss will make any move for the 24-year-old before the window closes at 6pm on Tuesday but they do suggest that we’re keeping a close eye on his progress.

And the Arsenal scouting team will have been impressed by what they’ve seen so far this season as Mahrez has come flying out the blocks and is currently joint top scorer in the Premier League with 4 goals in 4 games so far.

He’s predominantly a winger but is also capable of playing as a striker so he would give Wenger some useful options in attack, plus he now has experience of playing in the Premier League.

The Star claim that Mahrez has already been linked with a £5m move to Roma or Villarreal, so we could face competition for his signature. However, the paper also says that Leicester are adamant they won’t be forced to sell this summer so it appears we’ll face a tough task luring him away from the King Power if Arsene does formalise his interest any time soon.

I must admit that while Mahrez has been impressive since moving to Leicester in 2014, I wouldn’t be too disappointed if we missed out as he’s not the world class talent we need to turn us in to genuine title challengers.

We need an established striker like Karim Benzema or Edinson Cavani, not another squad player like Mahrez, so I hope Arsene is going to be ambitious during the next two days and really push the boat out to sign a top class finisher.