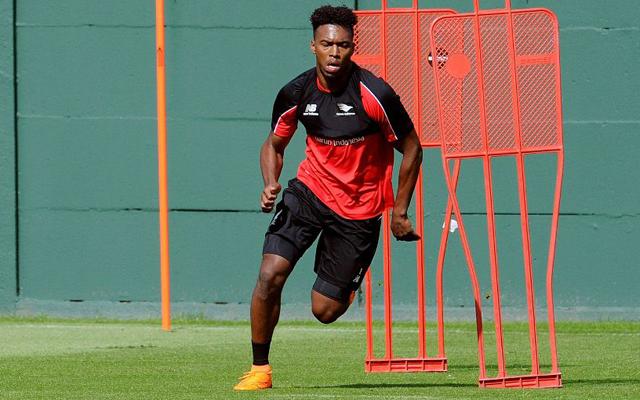 Liverpool have been handed a major injury blow ahead of their clash against Manchester United with Daniel Sturridge ruled out of the trip to Old Trafford, according to the Mirror.

Sturridge was initially expected to be on the sidelines until November following hip surgery at the end of last season but the striker has made a swift recovery and has been stepping up his rehabilitation at the clubs Melwood training base in recent weeks.

Liverpool had hoped the 26-year-old would be able to resume full first team training this week which would have put him in contention to make his long awaited return against Man Utd next Saturday.

However, the Mirror claim that Sturridge’s return has been put back with the striker now not expected to rejoin full training until next week at the earliest meaning there is no chance he’ll play any part at Old Trafford.

The news will come as a major blow to Brendan Rodgers as I’m sure he would have loved to have had Sturridge available against their fierce rivals, even if it was to hand him a cameo off the substitutes bench.

The Reds boss is already without influential attacker Philippe Coutinho following his dismissal against West Ham and with Sturridge now also ruled out, it looks like the onus will be on summer signing Christian Benteke to provide the goal threat up front.

If Sturridge is able to take part in full training after the international break next week, the Mirror says he’ll then target a first team return by the end of the month. Liverpool entertain Norwich City on September 20 before welcoming Aston Villa to Anfield the following week so the striker will be hoping to play some part in those games.