With the summer transfer window now closed for business, it’s time to start looking at those deals that failed to get over the line and those which are being lined-up for the future. Today, Arsenal are linked with Breel Embolo…. 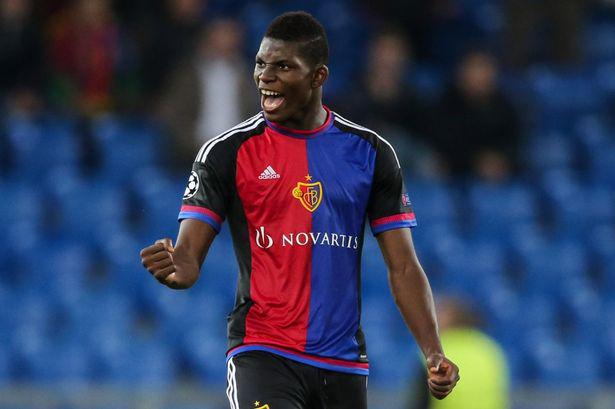 Arsenal have joined Tottenham Hotspur in the race for highly-rated FC Basel striker Breel Embolo as the Gunners assess their attacking options ahead of the January window, according to the Express.

Embolo has progressed through the Basel youth system having joined as a 13-year-old in 2010 and helped the Under-16 side win back-to-back youth championships in 2011/12 and 2012/13 leading to him being handed his first professional contract on his 16th birthday.

The striker has developed into one of the most highly-rated young prospects in Swiss football and broke into the Basel first team set-up last season, with the teenager going on to score 17 goals and provide 13 assist in his 42 appearances last term.

Embolo has continued his excellent form this season with 3 goals and 2 assists in his 9 games so far and his potential has attracted interest from all over Europe, including here in the Premier League.

The Express reported last month that Tottenham were showing a keen interest in the 18-year-old with boss Mauricio Pochettino sending scouts to watch him in action against Luzern in August.

However, it looks like Spurs may now face stiff competition from their North London rivals as the newspaper is citing reports coming out of Italy that suggest Arsenal have now joined the race for Embolo’s signature.

Arsene Wenger was heavily criticised for not bringing in another striker during the summer transfer window so it appears he’s now assessing his targets ahead of the winter and Embolo could be on his radar.

But Arsenal and Tottenham will have to be prepared to dig deep if they want to secure the youngsters services as the Express claim Basel will demand upward of £10m for his signature.

The North London duo could get another chance to see what Embolo is capable of tonight as he could feature during Switzerland’s Euro 2016 qualifier against England at Wembley.

He’s certainly a great talent who looks to have a bright future ahead of him but I’m not sure he’s the player most Arsenal fans have in mind when they think of buying a new striker. Having been linked with established names such as Karim Benzema, I don’t think the Gooner’s would be satisfied if Wenger ended up buying Embolo in January.