Arsenal will look to make it two wins on the bounce when they take on Stoke at the Emirates on Saturday. Here is the side we think Wenger will select.

Arsenal will look to make it two wins on the bounce when they take on Stoke at the Emirates on Saturday afternoon. Here is the side Gooner Mac thinks Arsene Wenger will select for the game:

Goalkeeper: Petr Cech is certain to start the game. He had a debut to forget but has shown his quality in more recent games including putting in a Man of the Match display against Liverpool.

Defence: Laurent Koscielny is available after taking part in full training despite missing France’s win over Serbia on Monday with a back injury. The question is who’ll partner him in the middle of defence….

Gabriel has been excellent in our last two matches while Per Mertesacker has been out with a virus but the German giant is now back in contention so it will be interesting to see who Wenger goes for. I think Gabriel will keep his place.

Hector Bellerin is expected to continue at right-back while Nacho Monreal is also likely to keep his place ahead of Kieran Gibbs at left-back.

Midfield: Santi Cazorla is almost certain to continue alongside Francis Coquelin in the middle of the park as Jack Wilshere has been ruled out again after suffering a minor injury setback in training.

Attack: With Cazorla in the middle, Aaron Ramsey will be forced to play out on the right as Mesut Ozil is back having missed the win at Newcastle before the international break.

I’m not a fan of Ramsey on the right but Arsene seems unable to drop him or Cazorla so the Welshman is likely to be shunted back out to the wing with the likes of Theo Walcott and Alex Oxlade-Chamberlain among the subs.

Olivier Giroud is low on confidence but I expect Arsene to start him as we need his height and physical presence against Stoke, while Alexis Sanchez should once again start on the left. 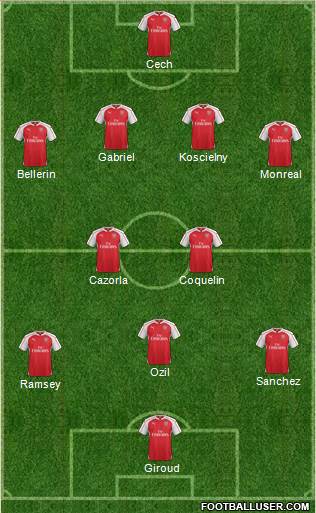