Chelsea will be looking to get back on track when they take on Everton on Saturday afternoon. Here is the side I think Jose Mourinho will pick:

Chelsea will be looking to get their Premier League title defence back on track when they take on Everton at Goodison Park on Saturday afternoon. Here is the side I think Jose Mourinho will pick:

Goalkeeper: Thibaut Courtois is a major injury doubt after picking up an ankle injury in training on Wednesday. The Belgian international will be assessed on Friday but as it stands it looks like Asmir Begovic may have to deputise in goal.

Defence: Mourinho was furious with how his team defended against Crystal Palace last time out but I’m not convinced he’ll make too many changes at the back just yet. John Terry is set to return from suspension so he should help shore up the back four this weekend.

I think Gary Cahill will get the nod ahead of Kurt Zouma with Cesar Azpilicueta also keeping his place at left-back. Branislav Ivanovic has been heavily criticised for his performances so far this season but I don’t think we’ll see the experienced Serb axed from the side any time soon.

Midfield: Mourinho was also extremely critical of Cesc Fabregas’s display against Palace but again I think we’ll see him stick by the Spaniard and hope that his public dressing down will motivate the midfielder. Therefore, I think we’ll see Fabregas start alongside Nemanja Matic in midfield.

Attack: Willian has arguably been Chelsea’s most consistent performer so far so it’s hard to see the hard-working Brazilian left out. Eden Hazard is yet to hit top form this season but there’s no way he’ll be dropped so expect to see him start on the left once again.

Diego Costa is another who’s under-performing this season but he should continue to lead the line up front with summer signing Pedro on the right. 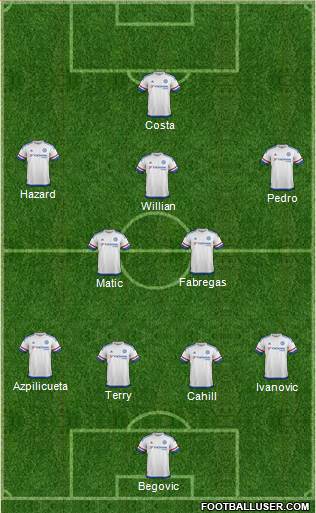