Man Utd will be looking to get off to a positive start in Europe when they take on PSV on Tuesday night. Here is the side I think van Gaal will pick

Manchester United will be looking to get off to a positive start in the Champions League when they take on PSV Eindhoven on Tuesday night. Here is the side I think Louis van Gaal will pick:

Goalkeeper: David de Gea made a successful return to the starting eleven against Liverpool on Saturday and there’s no reason to think the Spaniard won’t continue between the sticks tomorrow night.

Defence: van Gaal has played a settled back four for most of the season so far and I expect that will continue against PSV. That means Matteo Darmian at right back, Luke Shaw on the left and Daley Blind continuing alongside Chris Smalling in the middle of defence.

Midfield: Michael Carrick is unlikely to play for a second time in four days having started against Liverpool so I expect Morgan Schneiderlin will come back in to the side after being left out on Saturday.

Bastian Schweinsteiger is likely to keep his place in midfield, as is Ander Herrera – who was on target during the 3-1 victory at Old Trafford at the weekend.

Attack: Wayne Rooney has been left back in Manchester nursing a minor injury so it will be interesting to see who starts up top. Marouane Fellaini deputised last time out but we could see youngster Anthony Martial make his first start after coming off the bench to score on his debut against the Merseysider’s.

Memphis Depay should start against his former side for the first time since leaving in the summer while Juan Mata should also keep his place in attack. 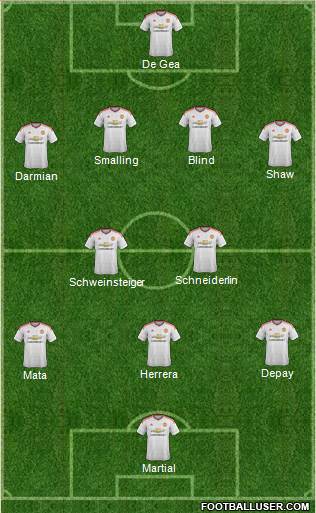