Man Utd players have been showing their support on social media to Luke Shaw – who has vowed to return stronger than ever following his double leg break. 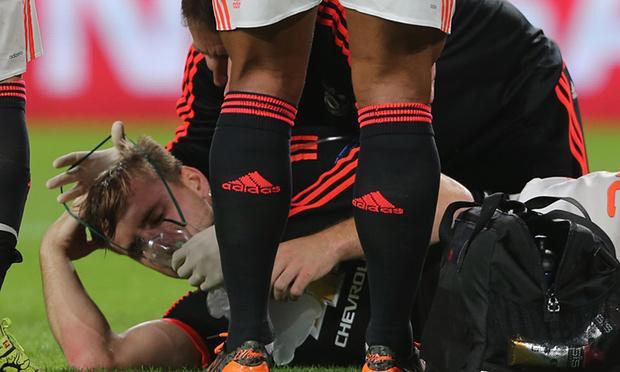 Manchester United players have been showing their support to team mate Luke Shaw on social media and the defender has vowed to return stronger than ever following his double leg break.

Shaw received lengthy treatment on the pitch following a heavy tackle from Hector Moreno midway through the first half of United’s Champions League clash with PSV Eindhoven last night.

News soon filtered through that the England international had suffered a double leg break which will not only rule him out for at least six months, but could also make him a doubt for next summer’s European Championships.

Devastated by the news, United players have taken to social media sites like Twitter and Instagram to show their support and offer words of encouragement to their 20-year-old team mate.

David De Gea, Chris Smalling, Ashley Young, Adnan Januzaj, Juan Mata, Memphis Depay, Phil Jones, Marcos Rojo and Ander Herrera have all shown their support to Shaw while the player himself has thanked everyone for their messages and vowed to come back stronger than ever.

It’s a huge blow to the youngster as he had made an excellent start to the season and appeared to have established himself as Roy Hodgson’s first choice left-back for England. Hopefully his recovery is swift and he can get himself back playing again as soon as possible.

Here are all the messages from the United players:

Defeat hurts, but @LukeShaw23's injury hurts even more. We hope you come back even stronger!

My thoughts and prayers are with @LukeShaw23 Hoping for a quick recovery and to be playing alongside him again as soon as possible!

Very disappointing night for us. Wish @LukeShaw23 a speedy recovery, gutted for you, stay strong mate

Sad about the defeat but much sadder about Luke's injury. Come back soon my friend pic.twitter.com/VHO6gusvF2

My man Luke, what an awful night. You'll get back on top, I'm sure of that. pic.twitter.com/s8TNfC23pn

Thank you everyone for your messages , words can't describe how gutted I am , my road to recovery starts now, I will come back stronger.

I go now to bed, frustrated and dissapointed about the result of the game. But soon, it will be another game and we'll put everything to win again. That's this sport… But now i'm very gutted for this man… That's the @lukeshaw23 i know. You are always smiling, my friend. Keep doing that, be strong and think positive. We all want you to come back soon, we will miss you for some time, but we will still enjoy in this season with your football, Luke.