Arsenal take on Dinamo Zagreb in the Champions League this evening. Here’s a preview with team news, likely line-up, betting and predicted score for the game.

Arsenal will kick off their Champions League campaign with a tricky trip to Croatia to face Dinamo Zagreb this evening.

We head into the game in decent form having followed up our 1-0 win over Newcastle United with a comfortable 2-0 victory over Stoke City on Saturday.

This will be our 18th consecutive season in Europe’s elite competition and only Real Madrid can boast a better record, but Arsene Wenger will no doubt be looking to improve upon our recent record in the latter stages.

Since 2009/10, we haven’t made it past the round of 16, which is a terrible record for a club of our size, but before we can even think about the quarter finals or beyond we first have to get out of a group that also includes Bayern Munich and Olympiacos.

The first test will be away to a Dinamo side that have won their domestic title for the last decade and haven’t been beaten in 11 months, but they have never made it out of the group stages in Europe so a win is a must tonight if we want to give ourselves any chances of pipping Bayern to top spot.

Per Mertesacker trained with the rest of the squad on Tuesday but Arsene Wenger has previously hinted that the defender still isn’t ready to return from his virus so it looks like he could miss out again tonight.

Jack Wilshere is out until Christmas after it was confirmed he needed surgery to repair his fractured leg while Aaron Ramsey has been left back in North London to rest ahead of Saturday’s trip to Chelsea.

Mikel Arteta could get a rare run-out in midfield while Mathieu Debuchy is also set to start after Hector Bellerin was also left out of the squad.

Danny Welbeck and Tomas Rosicky are out until the New Year with long-term knee injuries.

Dinamo have few injury problems to deal with but midfielder Goncalo Santos will miss out through suspension. 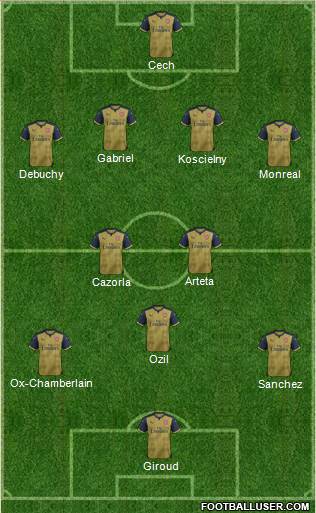 Dinamo Zagreb 0-2 Arsenal: We looked like we were back to our best against Stoke on Saturday and if we can create half as many chances tonight, we should emerge as comfortable victors. The hosts aren’t used to losing domestically but it’s a different story in Europe and I can see us coming away with all three points tonight.

Arsenal are the 8/15 favourites to win the game but Football-Talk can get new customers enhanced odds of 4/1 on Arsenal taking home the three points. My prediction of 2-0 win is available at odds of 13/2, and I also like the look of Olivier Giroud to open the scoring at odds of 7/2. If we combine that with a 2-1 away win in a score-cast, then we get very tempting odds of 16/1.