Liverpool take on Bordeaux in the Europa League this evening. Here’s a preview with team news, likely line-up, betting and predicted score for the game.

A weakened Liverpool kick-off their Europa League campaign with a trip to the Nouveau Stade de Bordeaux to take on Bordeaux tonight.

Brendan Rodgers has decided to leave six of his usual first team regulars at home in order to rest them ahead of Sunday’s clash with Norwich City at Anfield.

Few could complain about the Northern Irishman prioritising the Premier League over the Europa League but it is a big risk leaving so many key men out for such a tricky away game.

Bordeaux finished sixth in the Ligue 1 table last season but have a solid record on home soil with PSG, Monaco and Marseille all being put to the sword last year, so Liverpool could be in for a tough test tonight.

The Reds have endured a disappointing start to the new season having taken just one point from their last three league games and have conceded six goals in their last two outings, so Rodgers will be hoping for a morale-boosting win in Europe.

James Milner, Christian Benteke, Nathaniel Clyne, Lucas Leiva, Martin Skrtel and Dejan Lovren have all been left back in Merseyside to rest ahead of the Norwich game.

Daniel Sturridge is back in training but won’t feature tonight so he joins Joe Allen in missing the trip, with the midfielder still out with a hamstring injury.

Jordan Henderson returned home yesterday following a trip to the United States to receive treatment on his troublesome heel injury so he’ll also be missing.

Adam Lallana could make his return after recovering from a thigh injury while Philippe Coutinho is set to start after missing the Man Utd defeat through suspension.

Youngsters Connor Randall, Cameron Brannagan and Dan Cleary have all travelled to France and will be hoping to make their senior debuts at some point.

Rodgers has confirmed that Divock Origi and Mamadou Sakho will both start while Alberto Moreno and Jordan Rossiter are also expected to be given a run-out. 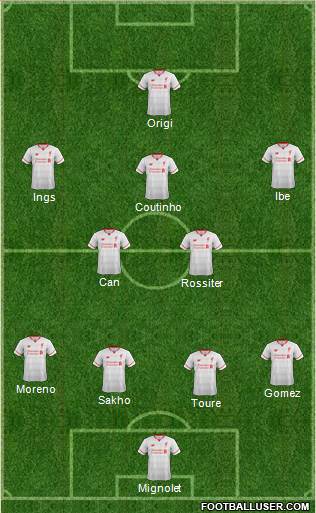 Bordeaux 1-1 Liverpool: With so many changes made to the starting eleven, it’s difficult to see Liverpool putting in a top class performance and Bordeaux are a tricky side to beat away from home. So I can see this one ending in a stalemate.

The bookmakers agree that this is going to be a tight game as both Bordeaux and Liverpool are 17/10 while the draw is on offer at 21/10. My prediction of 1-1 can be backed at odds of 5/1 while I also like the look of Danny Ings opening the scoring at 13/2. If we combine those two bets in a score-cast, then we get very tempting odds of 33/1.