Martial has enjoyed an excellent start to life at Old Trafford following his big-money move from Monaco on transfer deadline day with the young Frenchman bagging a brace during United’s 3-2 win over Southampton on Sunday afternoon.

The 19-year-old’s performance at St Mary’s earned him a score of 8.91 which was good enough to see him named in the WhoScored Premier League Team of the Week. Martial was joined in attack by Southampton’s Graziano Pelle – who got a score of 9.27 after scored two goals against United yesterday.

Fabregas pulled the strings for Chelsea during their 2-0 victory over former club Arsenal at Stamford Bridge on Saturday with his score of 8.23 enough to see him earn a spot in midfield.

The Chelsea star was joined by team-mate Eden Hazard in the eleven with the Belgian attacker scoring the second goal against the Gunners and was named as the Player of the Week with a score of 9.66.

John Ruddy was the best performing goalkeeper with his excellent display against Liverpool during Norwich’s 1-1 draw at Anfield earning him a score of 8.10.

Check out the full team below: 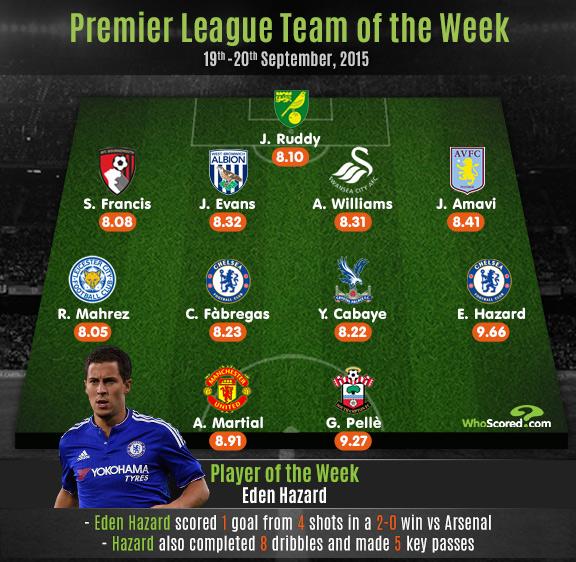