Arsenal will look to get back on track when they take on Tottenham in the Capital One Cup on Wednesday night. Here is the side we think Wenger will select.

Arsenal will look to get back on track after consecutive away defeats when they take on Tottenham in the 3rd round of the Capital One Cup on Wednesday night. Here is the side Gooner Mac thinks Arsene Wenger will select for the game:

Goalkeeper: David Ospina is set to be handed the gloves in goal with Petr Cech rested for League Cup duties.

Defence: Arsene has said he’ll play an experienced side but that doesn’t necessarily mean he won’t make a number of changes as we have plenty of experience among those who didn’t start against Chelsea on Saturday.

Per Mertesacker is set for a recall in defence after finally recovering from a nasty virus and he could be partnered by Calum Chambers at the back. Gabriel is expected to be suspended following his sending off on Saturday and although his appeal hearing is today, the FA are not expected to rescind the dismissal.

Mathieu Debuchy and Kieran Gibbs should also get another chance to impress with Hector Bellerin and Nacho Monreal given a breather.

Midfield: Francis Coquelin has been ruled out after suffering a knee injury at the weekend and Mikel Arteta is favourite to replace the Frenchman in the holding role.

Santi Cazorla is also suspended following his red card against Chelsea which could open the door for Aaron Ramsey to move back in to a more central role tomorrow night.

Attack: Alex Oxlade-Chamberlain is expected to start on the wing while Joel Campbell could also be handed a rare start in attack if Wenger decides to rest Alexis Sanchez.

Mesut Ozil may be retained though as with Jack Wilshere and Tomas Rosicky injured and Cazorla banned, we don’t have too many players who can start in the No.10 role. Olivier Giroud should lead the line up front with Theo Walcott dropping out. 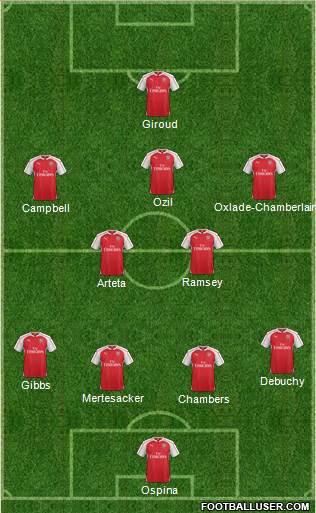