Chelsea take on Walsall in the 3rd round of the Capital One Cup at the Bescot Stadium on Wednesday night. Here’s the side I think Jose Mourinho will pick:

Chelsea begin the defence of the Capital One Cup when they take on Walsall in the 3rd round at the Bescot Stadium on Wednesday night. Here is the side I think Jose Mourinho will pick:

Defence: Mourinho is expected to make wholesale changes from the side that beat Arsenal on Saturday with Cesar Azpilicueta perhaps the only outfield player to retain his place in the eleven.

Branislav Ivanovic should be rested along with Kurt Zouma and Gary Cahill with Mourinho confirming that John Terry will be recalled at the back. Baba Rahman should also get another chance to impress while summer signing Papy Djilobodji could make his full debut.

Midfield: Ruben Loftus-Cheek should start in the middle of the park and could be joined by John Obi Mikel with Nemanja Matic and Cesc Fabregas given a well-earned breather.

Attack: Willian is expected to miss out once again with a hamstring injury while Pedro, Oscar and Eden Hazard should join Diego Costa in being given a rest.

Mourinho has confirmed that Radamel Falcao will lead the attack and he could be joined by Ramires, Loic Remy and youngster Kenedy – with the Brazilian attacker set to be handed his full debut. 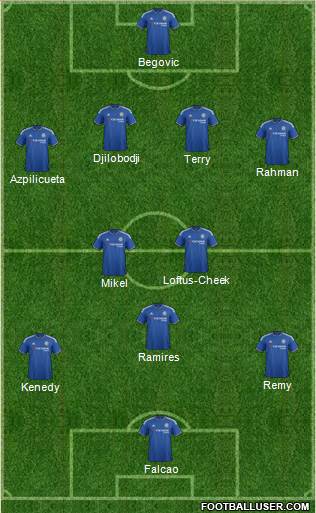