Liverpool, Manchester United, Arsenal and Chelsea all found out who they will play in the fourth round of the Capital One Cup tonight. See full details…

Liverpool, Manchester United, Arsenal and Chelsea all found out who they will play in the fourth round of the Capital One Cup tonight….

The draw for the fourth round of the Capital One Cup has taken place on Wednesday night and as usual it’s thrown up some intriguing games.

Manchester City were first out of the hat and they’ve been drawn at home to play fellow Premier League outfit Crystal Palace after thrashing Sunderland on Tuesday.

Arsenal beat North London rivals Tottenham 2-1 on Wednesday night and they’ve been rewarded with a tricky trip to Hillsborough to face Sheffield Wednesday after they beat Newcastle United at St James’ Park.

Chelsea have also been handed a testing away trip after being drawn to play Stoke City at the Britannia Stadium. Jose Mourinho’s men began the defence of their League Cup with a comfortable 4-1 win over Walsall.

Manchester United will be pleased to have been drawn at home again as they’ll welcome Middlesbrough to Old Trafford after booking their place in the fourth round with a 3-0 victory over Ipswich.

Liverpool edged past Carlisle 3-2 on penalties after being held to a 1-1 draw and they’ll now play Bournemouth at Anfield in the next round. 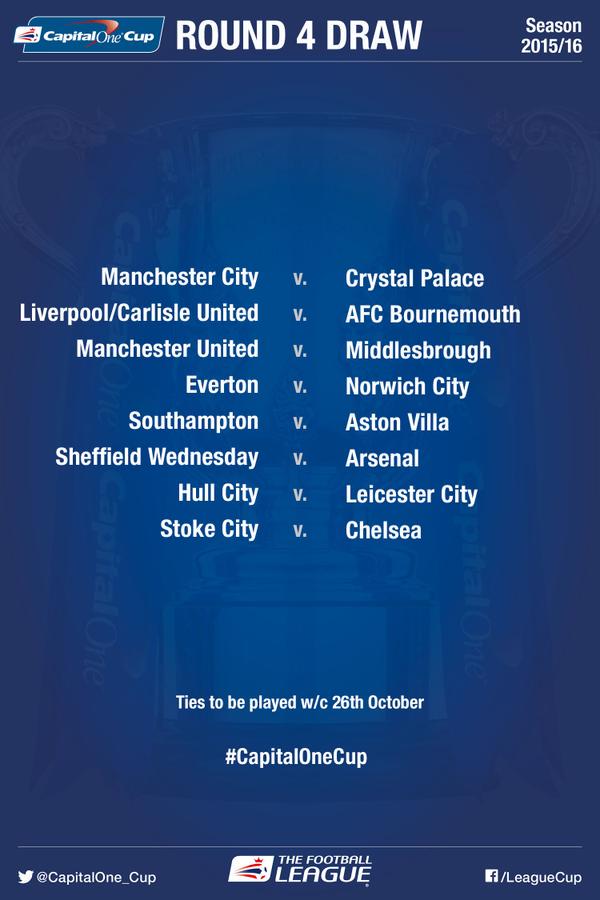