Man Utd will look to continue their excellent form when they take on Sunderland at Old Trafford on Saturday. Here’s the side I think Louis van Gaal will pick:

Man Utd will look to continue their excellent form when they take on Sunderland at Old Trafford on Saturday.  Here is the side I think Louis van Gaal will pick:

Defence: Marcos Rojo has picked up an injury so he joins Luke Shaw on the sidelines. Therefore, Ashley Young could continue to deputise at left-back.

Matteo Darmian should be recalled at right-back with Antonio Valencia dropping out while Chris Smalling and Daley Blind are expected to retain their partnership in the middle of defence.

Midfield: Morgan Schneiderlin and Michael Carrick could be recalled to the starting eleven after being rested against Ipswich last night which would see Bastian Schweinsteiger given a breather ahead of their Champions League clash with Wolfsburg. Marouane Fellaini and Ander Herrera are also expected to drop to the bench after playing in the League Cup.

Attack: Anthony Martial is set for a recall after coming off the bench to get on the score-sheet last night while Wayne Rooney should start in the No.10 role behind the young Frenchman.

Memphis Depay is expected to come back in to the side while Juan Mata should keep his place on the right wing. 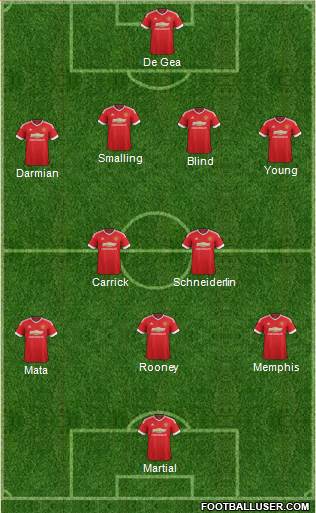