Chelsea will look to close the gap at the top of the table when they take on Newcastle on Saturday. Here’s the side I think Jose Mourinho will pick:

Chelsea will look to close the gap at the top of the table when they take on Newcastle at St James’ Park on Saturday. Here is the side I think Jose Mourinho will pick:

Defence: Mourinho is expected to make some changes to the side that beat Walsall in the Capital One Cup and that could mean John Terry once again dropping to the bench. The skipper has fallen out-of-favour in recent weeks so Kurt Zouma could start alongside Gary Cahill at the back.

Branislav Ivanovic should keep his place on the right side of defence with Cesar Azpilicueta coming back in to replace Baba Rahman on the left.

Midfield: Ruben Loftus-Cheek did well again last night but the youngster will make way for Nemanja Matic while Cesc Fabregas should replace John Obi Mikel in the middle of the park.

Attack: Diego Costa will continue his three-match suspension after being hit with a violent conduct charge by the FA so Mourinho has a decision to make as to who will start up front. Radamel Falcao drew a blank against Walsall last night while Loic Remy found the back of the net so the Frenchman may get the nod up top.

Pedro, Oscar and Eden Hazard are all set for recalls after being rested in the League Cup so Kenedy is set to drop out despite the Brazilian youngster getting himself on the score-sheet. 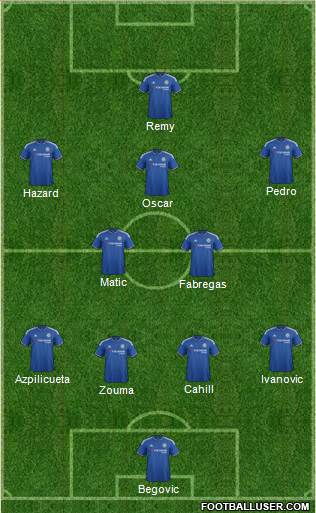