With the summer transfer window now closed for business, it’s time to start looking at those deals that failed to get over the line and those which are being lined-up for the future. Today, could Victor Valdes be heading to one of Man Utd rivals? 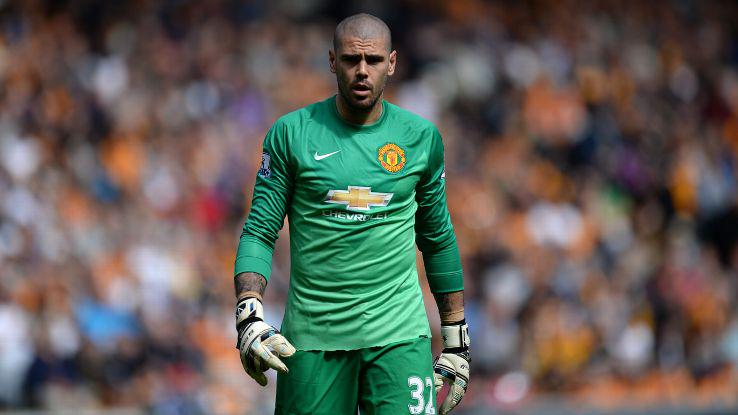 Chelsea and Liverpool are eyeing a surprise move for Manchester United goalkeeper Victor Valdes as the Spaniard continues to be out-of-favour under Louis van Gaal, according to ESPN.

Valdes signed a contract with United back in January after recovering from a serious knee injury that had kept him out for the previous 7 months following his release from Barcelona.

However, the 33-year-old quickly fell out with van Gaal after allegedly refusing to play for the under-21’s and has been frozen out of the first team picture ever since, with his only start coming against Hull City on the final day of last season.

With David De Gea and Sergio Romero well ahead of him in the pecking order, Valdes is highly unlikely to get any first team action at Old Trafford any time soon so it’s no wonder he’s being linked with a move away from the club.

It appears he could be offered a chance to remain in the Premier League as ESPN claim that Chelsea and Liverpool are both considering a surprise move for the Spanish international.

Asmir Begovic is currently Chelsea’s only fit senior keeper as Thibaut Courtois has been ruled out until the end of the year with a serious knee injury and ESPN suggest Jose Mourinho has identified Valdes as a possible new addition as he fears any injury or suspension to Begovic will leave him with a serious problem in goal.

Obviously any potential permanent deal couldn’t take place until January and by that point Courtois could be available again, but Chelsea could apply to the FA for permission to sign Valdes on an initial emergency loan.

But they could face competition from Liverpool as ESPN claim that Brendan Rodgers is also eyeing the former Barca star as he continues to have doubts over Simon Mignolet as his long-term number 1.

The Belgian was axed from first team duties mid-way through last season and while his form has picked up in recent months, there is still the feeling Liverpool need a more reliable goalkeeper if they’re going to challenge at the top of the league again.

Valdes clearly has no future at United and he’s not even been handed an official squad number this season but it remains to be seen whether van Gaal would be willing to do business with a direct rival such as Chelsea or Liverpool.

I think he’d be a shrewd buy for either club if they could get a deal agreed as Valdes was top class before his knee injury. He was Barcelona’s first choice keeper for over a decade and has won practically everything there is to win in football, so he’d bring a huge amount of quality and experience.

However, any move is still extremely unlikely. Chelsea would be fortunate if the FA did grant them an emergency loan and United are unlikely to sell any player to their North West rivals Liverpool, so I just don’t see anything coming of this.