Chelsea take on Porto in the Champions League tonight. Here’s a preview with team news, likely line-up, betting tips and predicted score for the game.

Chelsea will look to make it back-to-back Champions League wins when they take on Porto at the Estádio do Dragao tonight.

Jose Mourinho has vowed to wield the axe if his under-performing stars don’t rediscover their form soon after another disappointing display at the weekend.

The Blues were well below their best for much of the game against Newcastle but managed to fight back from 2-0 down to salvage a 2-2 draw at St James’ Park.

Mourinho will be looking for a much better display this evening as he takes his Chelsea side to his former club Porto – where he enjoyed much success after leading the Portuguese giants to the Champions League trophy back in 2003.

While the West Londoners may be struggling domestically, they did ease to a 4-0 win over Maccabi Tel Aviv two weeks ago so they’ll be looking to take another step closer towards qualification with victory tonight.

Diego Costa is available to play in Europe as he continues to serve his three-match domestic ban so the Spanish international is expected to return to the starting eleven tonight.

Mourinho is set to recall skipper John Terry after leaving him out against Newcastle. Kurt Zouma is the man most likely to drop out meaning Terry should rekindle his partnership alongside Gary Cahill.

Ramires and Willian are set for recalls after impressing off the bench at St James’ Park with Oscar and Pedro likely to drop out, while Branislav Ivanovic could make way for Baba Rahman with Cesar Azpilicueta moving to right-back.

Kenedy is a doubt for the game with a knee problem while Thiabut Courtois remains sidelined by a knee injury so Asmir Begovic will continue to deputise in goal.

As for Porto, winger Yacine Brahimi is a doubt with a knee injury but former Real Madrid goalkeeper Iker Casillas is set to face-off against his former manager Mourinho. 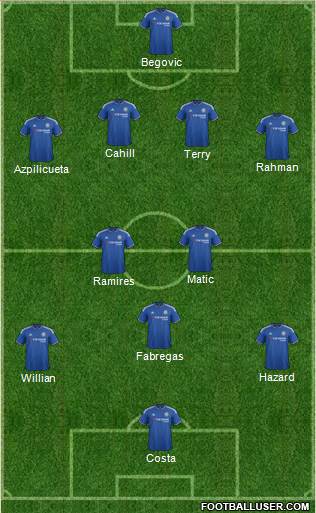 Porto 1-1 Chelsea: The Blues are not in great form right now and Porto have an excellent home record in the Champions League having won four and drawn one of their five games last season, so this is going to be an extremely tricky game. However, Mourinho has a decent record himself against the Portuguese giants so I can see Chelsea taking home a point.